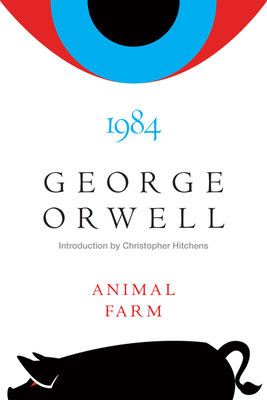 
Available in Warehouse. Wait for Email Confirmation for ETA
This edition features George Orwell's best known novels – 1984 and Animal Farm – with an introduction by Christopher Hitchens.

In 1984, London is a grim city where Big Brother is always watching you and the Thought Police can practically read your mind.  Winston Smith joins a secret revolutionary organization called The Brotherhood, dedicated to the destruction of the Party. Together with his beloved Julia, he hazards his life in a deadly match against the powers that be.

Animal Farm is Orwell's classic satire of the Russian Revolution -- an account of the bold struggle, initiated by the animals, that transforms Mr. Jones's Manor Farm into Animal Farm--a wholly democratic society built on the credo that All Animals Are Created Equal. But are they?
GEORGE ORWELL (1903–1950) was born in India and served with the Imperial Police in Burma before joining the Republican Army in the Spanish Civil War. Orwell was the author of six novels, including 1984 and Animal Farm, as well as numerous essays and nonfiction works.

CHRISTOPHER HITCHENS is the author of four collections of essays.