Chasing Aphrodite: The Hunt for Looted Antiquities at the World's Richest Museum (Hardcover) 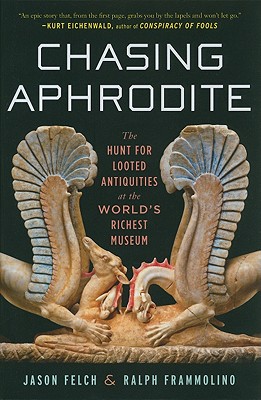 Chasing Aphrodite: The Hunt for Looted Antiquities at the World's Richest Museum (Hardcover)


This title is likely unavailable. Email or call for price and availability.
In recent years, several of America’s leading art museums have voluntarily given up their finest pieces of classical art to the governments of Italy and Greece. The monetary value is estimated at over half a billion dollars. Why would they be moved to such unheard-of generosity?

The answer lies at the Getty, one of the world’s richest and most troubled museums, and scandalous revelations that it had been buying looted antiquities for decades. Drawing on a trove of confidential museum records and frank interviews, Felch and Frammolino give us a fly-on-the-wall account of the inner workings of a world-class museum and tell the story of the Getty’s dealings in the illegal antiquities trade. The outlandish characters and bad behavior could come straight from the pages of a thriller—the wealthy recluse founder, the cagey Italian art investigator, the playboy curator, the narcissist CEO—but their chilling effects on the rest of the art world have been all too real, as the authors show in novelistic detail.

Fast-paced and compelling, Chasing Aphrodite exposes the layer of dirt beneath the polished façade of the museum business.

JASON FELCH is an investigative reporter with the Los Angeles Times. In 2006 he was a finalist for the Pulitzer Prize in Investigative Reporting for exposing the role of the J. Paul Getty Museum and other American museums in the black market for looted antiquities. His work has also been honored by Investigative Reporters and Editors, the Education Writers Association, the National Association of Science Writers, and the Society for Environmental Journalism. He lives in Pasadena, California, with his wife and son.


RALPH FRAMMOLINO reported for nearly 25 years at the Los Angeles Times, where he and former colleague Jason Felch were finalists for the 2006 Pulitzer Prize for Investigative Reporting for their articles about the J. Paul Getty Museum and looted antiquities. His work has also appeared in the New York Times and the Columbia Journalism Review. Frammolino is now a media consultant for various aid projects in Bangladesh, Nepal, and Sri Lanka, where he trains working journalists on investigative reporting techniques and right to information laws.

"America’s great art museums are the last sacred cows of our culture. It takes a special sort of intrepid investigator backed by a courageous organization to uncover the secrets and lies of these quasi-public institutions and the private agendas of their wealthy and influential patrons. Chasing Aphrodite is the result of one such rare convergence. A scary, true tale of the blinding allure of great art and the power of the wealth that covets it, it is also an inspiring example of the only greater power: the truth."-  Michael Gross, author of Rogues’ Gallery: The Secret History of the Moguls and the Money That Made the Metropolitan Museum

"A thrilling, well-researched book that offers readers a glimpse into the back-room dealings of a world-class museum--and the illegal trade of looted antiquities. Chasing Aphrodite should not be missed. " –Ulrich Boser, author of THE GARDNER HEIST: The True Story of the World's Largest Unsolved Art Theft "Chasing Aphrodite is an epic story that, from the first page, grabs you by the lapels and won’t let go. Jason Felch and Ralph Frammolino have penetrated the inner sanctum of one of the world’s most powerful museums, exposing how its caretakers – blinded by greed, arrogance  and self-deception – eagerly tapped international networks of criminals in pursuit of the next great masterpiece.  It is a breathtaking tale that I guarantee will keep you reading late into the night. - Kurt Eichenwald, author of CONSPIRACY OF FOOLS: A True Story

"Chasing Aphrodite is a brilliantly told, richly detailed, and vitally important account of how one of America’s top cultural institutions spent millions buying treasures stolen from ancient graves and then spent millions more trying to deny it. In the hands of Felch and Frammolino, the story gathers a riveting momentum as the Getty moves from one ethical smashup to another. The authors present an astonishing array of evidence, yet they are scrupulously balanced and keenly sensitive to the nuances of the cultural-property debate. Even if you think you know the story of the Getty, read this book. You won’t know whether to laugh or to cry, but you will be enthralled."  --Roger Atwood, author of Stealing History: Tomb Raiders, Smugglers, and the Looting of the Ancient World