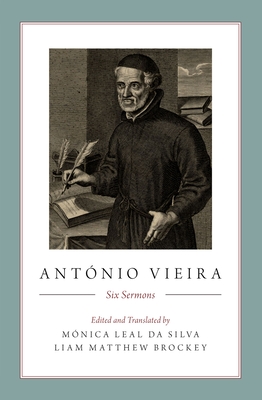 
Available in Warehouse. Wait for Email Confirmation for ETA
This book cannot be returned, cancelled, or exchanged. Please call for availability and pricing
This volume is the first English translation and annotation of the sermons of Ant nio Vieira, a major cultural figure in the Portuguese-speaking world. Born in Lisbon in 1608, Vieira was a Jesuit who lived and worked in both Europe and Brazil in the service of the church and the Portuguese
crown. His sermons are among the most renowned pieces of baroque oratory in the Portuguese language. These carefully selected sermons offer insight into Vieira's visionary thought on social and spiritual matters. In the Sermon for the Success of Portuguese Arms against the Dutch, Vieira inveighs against God for His apparent abandonment of the Portuguese and begs for divine intervention. His Sermon
of St. Anthony is an allegory that addresses the inequities that he witnessed in Brazil. The Sexagesima Sermon parodies literary clich's from his time while prescribing a more effective, if harsher, style of preaching. The Sermon of the Good Thief is a rebuke to the imperial officials who used their
positions for personal enrichment, and a warning to kings against complicity with corruption. Vieira's Sermon XXVII addresses African slaves and their Brazilian masters, attempting to comfort the first group in their trials and to admonish the second for their brutality. Finally, the Sermon called
Arm tells the story of the relic of Francis Xavier's arm sent from India to Italy in 1614, and pays tribute to the obedience of Vieira's Jesuit predecessor.