The World for Sale: Money, Power, and the Traders Who Barter the Earth's Resources (Hardcover) 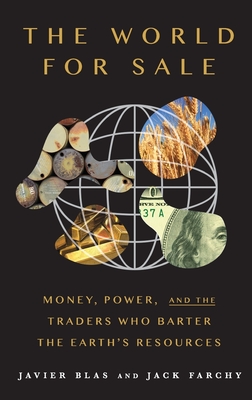 The World for Sale: Money, Power, and the Traders Who Barter the Earth's Resources (Hardcover)


On Our Shelves as of 9am Today
The modern world is built on commodities - from the oil that fuels our cars to the metals that power our smartphones. We rarely stop to consider where they have come from. But we should. In The World for Sale, two leading journalists lift the lid on one of the least scrutinised corners of the world economy: the workings of the billionaire commodity traders who buy, hoard and sell the earth's resources. It is the story of how a handful of swashbuckling businessmen became indispensable cogs in global markets: enabling an enormous expansion in international trade, and connecting resource-rich countries - no matter how corrupt or war-torn - with the world's financial centres. And it is the story of how some traders acquired untold political power, right under the noses of western regulators and politicians - helping Saddam Hussein to sell his oil, fuelling the Libyan rebel army during the Arab Spring, and funnelling cash to Vladimir Putin's Kremlin in spite of western
sanctions. The result is an eye-opening tour through the wildest frontiers of the global economy, as well as a revelatory guide to how capitalism really works.

Javier Blas and Jack Farchy are two of the best-known journalists covering energy, commodities and trading houses. Today, they both work for Bloomberg News, where Blas is Chief Energy Correspondent and Farchy is a Senior Reporter covering natural resources. Working together both at the FinancialTimes and now at Bloomberg, they've interviewed most of the key figures in the commodity trading industry, in many cases the first interviews the traders had ever given. They have an extensive network of contacts among executives, financiers, investors, government officials and civil society. Theyfounded the FT Global Commodities Summit, an annual conference which has become established as the pre-eminent gathering of the industry. This is their first book.