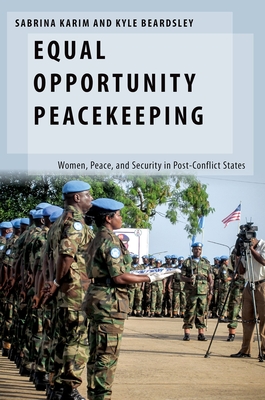 
Available in Warehouse. Wait for Email Confirmation for ETA
This book cannot be returned, cancelled, or exchanged. Please call for availability and pricing
Recent developments such as Sweden's Feminist Foreign Policy, the Hillary Doctrine, and the integration of women into combat roles in the U.S. have propelled gender equality to the forefront of international politics. The UN Department of Peacekeeping Operations, however, has been
integrating gender equality into peacekeeping missions for nearly two decades as part of the women, peace, and security agenda that has been most clearly articulated in UNSC Resolution 1325. To what extent have peacekeeping operations achieved gender equality in peacekeeping operations and been
vehicles for promoting gender equality in post-conflict states? While there have been major improvements related to women's participation and protection, there is still much left to be desired. Sabrina Karim and Kyle Beardsley argue that gender power imbalances between the sexes and among genders place restrictions on the participation of women in peacekeeping
missions. Specifically, discrimination, a relegation of women to safe spaces, and sexual exploitation, abuse, harassment, and violence (SEAHV) continue to threaten progress on gender equality. Using unique cross-national data on sex-disaggregated participation of peacekeepers and on the allegations
of SEAHV, as well as original data from the UN Mission in Liberia, the authors examine the origins and consequences of these challenges. Karim and Beardsley also identify and examine how increasing the representation of women in peacekeeping forces, and even more importantly through enhancing a more
holistic value for equal opportunity, can enable peacekeeping operations to overcome the challenges posed by power imbalances and be more of an example of and vehicle for gender equality globally.

Sabrina Karim is an Assistant Professor in Government at Cornell University. Between 2016-2017, she was a Dartmouth Dickey Center Fellow in U.S. Foreign Policy and International Security. Her research interests include gender reforms in post-conflict security forces, the effect of security sectorreforms on peace and order, the dynamics of peacekeeping missions, and the relationship between gender equality and violence. Kyle Beardsley is Associate Professor of Political Science at Duke University. He is author of The Mediation Dilemma. His research interests include third-party involvement in peace processes, the nature of intrastate rebellion, gender reforms in post-conflict security forces, and nuclear weapons.