The Ring of Truth: And Other Myths of Sex and Jewelry (Hardcover) 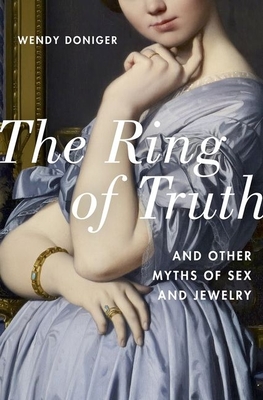 The Ring of Truth: And Other Myths of Sex and Jewelry (Hardcover)


Available in Warehouse. Wait for Email Confirmation for ETA
Why are sex and jewelry, particularly rings, so often connected? Why do rings continually appear in stories about marriage and adultery, love and betrayal, loss and recovery, identity and masquerade? What is the mythology that makes finger rings symbols of true (or, as the case may be, untrue)
love? The cross-cultural distribution of the mythology of sexual rings is impressive--from ancient India and Greece through the Arab world to Shakespeare, Marie Antoinette, Wagner, nineteenth-century novels, Hollywood, and the De Beers advertising campaign that gave us the expression, A Diamond is
Forever. Each chapter of The Ring of Truth, like a charm on a charm bracelet, considers a different constellation of stories: stories about rings lost and found in fish; forgetful husbands and clever wives; treacherous royal necklaces; fake jewelry and real women; modern women's revolt against the
hegemony of jewelry; and the clash between common sense and conventional narratives about rings. Herein lie signet rings, betrothal rings, and magic rings of invisibility or memory. The stories are linked by a common set of meanings, such as love symbolized by the circular and unbroken shape of the
ring: infinite, constant, eternal--a meaning that the stories often prove tragically false. While most of the rings in the stories originally belonged to men, or were given to women by men, Wendy Doniger shows that it is the women who are important in these stories, as they are the ones who put the jewelry to work in the plots.

Wendy Doniger is the Mircea Eliade Distinguished Service Professor of the History of Religions at the University of Chicago and the author of over 40 books, including On Hinduism and Redeeming the Kamasutra.