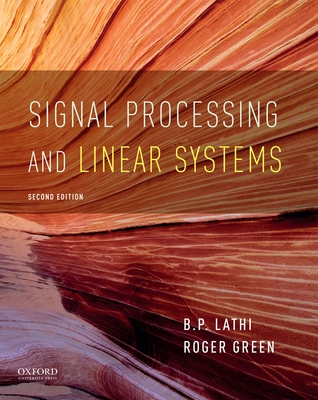 By B. P. Lathi, Roger Green

This second edition contains much of the content of Linear Systems and Signals, Third Edition, by the same authors, with added chapters on analog and digital filters and digital signal processing, plus additional applications to communications and controls. Unlike Linear Systems & Signals 3e,
in this book the Laplace transform follows Fourier. This book contains enough material on discrete-time systems to be used in a traditional course in Signals and Systems and in an introductory course in Digital Signal Processing.
B. P. Lathi is Professor Emeritus of Electrical Engineering at California State University, Sacramento. Dr. Lathi is renowned for his excellent writing, and each of his books has found significant markets in the crowded upper-level electrical engineering segment. Roger Green is an Associate Professor of Electrical Engineering at North Dakota State University. He has published numerous scholarly articles and given presentations on MATLAB, Signal Processing, and Fourier Analysis as a member of both the IEEE and ASEE. Along with four colleagues, he is the proudowner of a patent for a Vector Calibration System, designed to identify vector mismatch between a plurality of signal paths and frequencies.