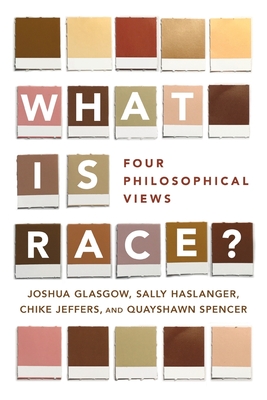 
Available in Warehouse. Wait for Email Confirmation for ETA
This book cannot be returned, cancelled, or exchanged. Please call for availability and pricing
Across public discourse, in the media, politics, many branches of academic inquiry, and ordinary daily interactions, we spend a lot time talking about race: race relations, racial violence, discrimination based on race, racial integration, racial progress. It is fair to say that questions about race have vexed our social life. But for all we speak about race, do we know what race is? Is it a social construct or a biological object? Is it a bankrupt holdover from a time before sophisticated scientific understanding and genetics, or can it still hold up in biological, genetic, and other types of research? Most fundamentally, is race real? In this book, four prominent philosophers and race theorists debate how best to answer these difficult questions, applying philosophical tools and the principles of social justice to cutting-edge findings from the biological and social sciences. Each presents a distinct view of race: Sally Haslanger argues that race is a socio-political reality. Chike Jeffers maintains that race is not only political but also, importantly, cultural. Quayshawn Spencer pursues the idea that race is biologically real. And Joshua Glasgow argues that either race is not real, or if it is, it must be real in a way that is neither social nor biological. Each offers an argument for their own view and then replies to the others. Woven together, the result is a lively debate that opens up numerous ways of understanding race. Above all, it is call for sophisticated and principled discussion of something that significantly permeates our lives.

Joshua Glasgow is Associate Professor of Philosophy at Sonoma State University, where he also served as Director of the Center for Ethics, Law, and Society. He has published numerous works in philosophy of race, moral philosophy, and other areas of philosophy. His previous book, A Theory of Race (Routledge), was published in 2009. Sally Haslanger is Ford Professor of Philosophy and Women's and Gender Studies at MIT. She has published broadly in metaphysics, epistemology, feminist theory, and critical race theory. Her book Resisting Reality: Social Construction and Social Critique (OxfordIn 2015, she was the Spinoza Professor at the University of Amsterdam and Koninklijke Van Gorcum, 2017). In 2013-14, she served as the President of the American Philosophical Association, Eastern Division and in 2015 she was elected to the American Academy of Arts and Sciences. Chike Jeffers is an Associate Professor of Philosophy at Dalhousie University in Halifax, Nova Scotia. He specializes in Africana philosophy and philosophy of race, with broad interests in social and political philosophy and ethics. He is the editor of Listening to Ourselves: A Multilingual Anthology of African Philosophy (SUNY Press, 2013) and he is currently working on a book-length introduction to the philosophical thought of W.E.B. Du Bois. With Peter Adamson, he is the co-author of the History of Africana Philosophy, a series of podcasts forming part of Adamson's acclaimed History of Philosophy Without Any Gaps. Quayshawn Spencer is the Robert S. Blank Presidential Associate Professor of Philosophy at the University of Pennsylvania. He has a PhD in philosophy and an MS in biology from Stanford University. He specializes in philosophy of science, philosophy of biology, and philosophy of race. His research in the metaphysics of race has appeared in such journals as Philosophy of Science and Philosophical Studies, and has been funded by the Ford Foundation and the National Science Foundation. He is the editor of The Race Debates from Metaphysics to Medicine, a forthcoming edited volume with Oxford University Press. He is also an editorial board member for Ergo, Biology & Philosophy, and Critical Philosophy of Race.