The Art of Emergency: Aesthetics and Aid in African Crises (Hardcover) 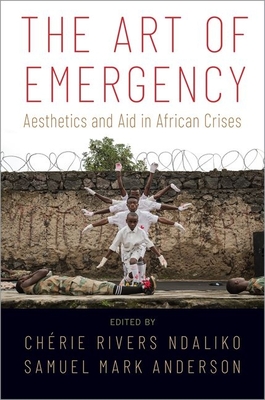 The Art of Emergency: Aesthetics and Aid in African Crises (Hardcover)


Available in Warehouse. Wait for Email Confirmation for ETA
The Art of Emergency charts the maneuvers of art through conflict zones across the African continent. Advancing diverse models for artistic and humanitarian alliance, the volume urges conscientious deliberation on the role of aesthetics in crisis through intellectual engagement, artistic
innovation, and administrative policy. Across Africa, artists increasingly turn to NGO sponsorship in pursuit of greater influence and funding, while simultaneously NGOs-both international and local-commission arts projects to buttress their interventions and achieve greater reach and marketability.
The key values of artistic expression thus become healing and sensitization, measured in turn by impact and effectiveness. Such rubrics obscure the aesthetic complexities of the artworks and the power dynamics that inform their production. Clashes arise as foreign NGOs import foreign
aesthetic models and preconceptions about their efficacy, alongside foreign interpretations of politics, medicine, psychology, trauma, memorialization, and so on. Meanwhile, each community embraces its own aesthetic precedents, often at odds with the intentions of humanitarian agencies. The arts are
a sphere in which different worldviews enter into conflict and conversation. To tackle the consequences of aid agency arts deployment, volume editors Samuel Mark Anderson and Ch rie Rivers Ndaliko assemble ten case studies from across the African continent employing multiple media including music, sculpture, photography, drama, storytelling, ritual, and protest marches.
Organized under three widespread yet under-analyzed objectives for arts in emergency-demonstration, distribution, and remediation-each case offers a different disciplinary and methodological perspective on a common complication in NGO-sponsored creativity. By shifting the discourse on arts activism
away from fixations on message and toward diverse investigations of aesthetics and power negotiations, The Art of Emergency brings into focus the conscious and unconscious configurations of humanitarian activism, the social lives it attempts to engage, and the often-fraught interactions between the
two.