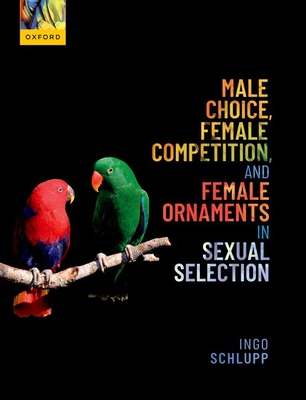 
Available for Pre-Order Now
When Charles Darwin first proposed Sexual Selection Theory, he suggested two mechanisms: competition among males and choice by females. Although their importance is long established and extremely well understood, their mirror images have remained largely underappreciated; males also choose, and females also compete. The combination of male mate choice (MMC) and female competition (FC) may be one of the most overlooked yet important and intriguing phenomena in modern sexual selection theory. This novel text reviews our current understanding of MMC and FC, highlighting the important connections between them. It places both concepts in the context of related fields such as female choice, mating systems, and sexual selection theory more broadly. A truly holistic approach is provided which takes all the relevant elements into consideration, especially the relative roles of MMC and FC, female ornamentation, their evolutionary consequences, and their genetic basis. Considering male mate choice and female competition in this way as effectively two sides of the same coin creates a powerful paradigm for a more complete understanding of sexual selection. Male Choice, Female Competition, and Female Ornaments in Sexual Selection is suitable for both graduate students and researchers interested in sexual selection from an evolutionary, psychological, and anthropological perspective. It will also appeal to a broader audience of behavioural ecologists and evolutionary psychologists.

Ingo Schlupp, Presidential Professor of Biology, Department of Biology, University of Oklahoma, USA Ingo Schlupp is Presidential Professor of Biology at the Department of Biology, University of Oklahoma, USA. He is broadly interested in ecology and evolution; in particular, he wants to understand some of the old, deep puzzles in evolution, such as the evolution of meiosis, speciation, and large scale biogeography. Most of his work uses livebearing fishes as model organisms.