Immodest Acts: The Life of a Lesbian Nun in Renaissance Italy (Studies in the History of Sexuality) (Paperback) 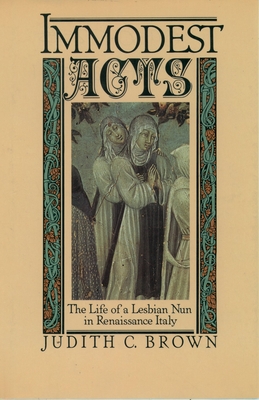 Immodest Acts: The Life of a Lesbian Nun in Renaissance Italy (Studies in the History of Sexuality) (Paperback)


Available in Warehouse. Wait for Email Confirmation for ETA
This book cannot be returned, cancelled, or exchanged. Please call for availability and pricing
The discovery of the fascinating and richly documented story of Sister Benedetta Carlini, Abbess of the Convent of the Mother of God, by Judith C. Brown was an event of major historical importance. Not only is the story revealed in Immodest Acts that of the rise and fall of a powerful woman in a church community and a record of the life of a religious visionary, it is also the earliest documentation of lesbianism in modern Western history.
Born of well-to-do parents, Benedetta Carlini entered the convent at the age of nine. At twenty-three, she began to have visions of both a religious and erotic nature. Benedetta was elected abbess due largely to these visions, but later aroused suspicions by claiming to have had supernatural contacts with Christ. During the course of an investigation, church authorities not only found that she had faked her visions and stigmata, but uncovered evidence of a lesbian affair with another nun, Bartolomeo. The story of the relationship between the two nuns and of Benedetta's fall from an abbess to an outcast is revealed in surprisingly candid archival documents and retold here with a fine sense of drama.