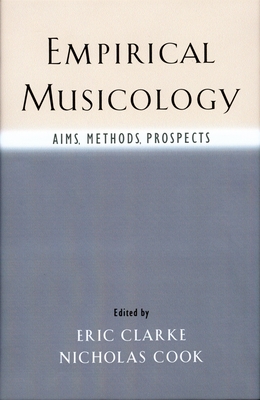 
Available in Warehouse. Wait for Email Confirmation for ETA
This book cannot be returned, cancelled, or exchanged. Please call for availability and pricing
The study of music is always, to some extent, "empirical," in that it involves testing ideas and interpretations against some kind of external reality. But in musicology, the kinds of empirical approaches familiar in the social sciences have played a relatively marginal role, being generally restricted to inter-disciplinary areas such as psychology and sociology of music. Rather than advocating a new kind of musicology, Empirical Musicology provides a guide to empirical approaches that are ready for incorporation into the contemporary musicologist's toolkit. Its nine chapters cover perspectives from music theory, computational musicology, ethnomusicology, and the psychology and sociology of music, as well as an introduction to musical data analysis and statistics. This book shows that such approaches could play an important role in the further development of the discipline as a whole, not only through the application of statistical and modeling methods to musical scores but
also--and perhaps more importantly--in terms of understanding music as a complex social practice.

Eric Clarke, Professor of Music at the University of Sheffield, has published on the psychology of performance, the study of rhythm, and musical meaning. He was Chair of the Society for Research in Psychology of Music and Music Education from 1994-2000. Nicholas Cook is Professor of Music at Royal Holloway, University of London. His books include A Guide to Musical Analysis; Music, Imagination, and Culture; and Music: A Very Short Introduction. He is a Fellow of the British Academy and editor of the Journal of the Royal Musical Association.