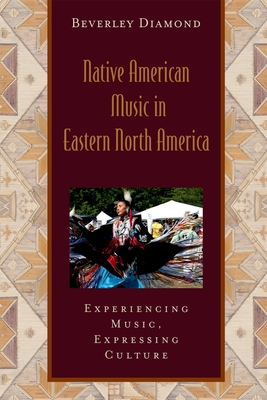 Native American Music in Eastern North America is one of many case-study volumes that can be used along with Thinking Musically, the core book in the Global Music Series. Thinking Musically incorporates music from many diverse cultures and establishes the framework for exploring the practice
of music around the world. It sets the stage for an array of case-study volumes, each of which focuses on a single area of the world. Each case study uses the contemporary musical situation as a point of departure, covering historical information and traditions as they relate to the present. Visit
www.oup.com/us/globalmusic for a list of case studies in the Global Music Series. The website also includes instructional materials to accompany each study.
Native American Music in Eastern North America is one of the first books to explore the contemporary musical landscape of indigenous North Americans in the north and east. It shows how performance traditions of Native North Americans have been influenced by traditional social values and
cultural histories, as well as by encounters and exchanges with other indigenous groups and with newcomers from Europe and Africa. Drawing on her extensive fieldwork and on case studies from several communities--including the Iroquois, the Algonquian-speaking nations of the Atlantic seaboard, and
the Inuit of the far north--author Beverley Diamond discusses intertribal celebrations, popular music projects, dance, art, and film. She also considers how technology has mediated present-day cultural communication and how traditional ideas about social roles and gender identities have been
negotiated through music.
Enhanced by accounts of local performances, interviews with tribal elders and First Nations performers, vivid illustrations, and hands-on listening activities, Native American Music in Eastern North America provides a captivating introduction to this under-examined topic. It is packaged with an
80-minute audio CD containing twenty-six examples of the music discussed in the book, including several rare recordings. The author has also provided a list of eighteen songs representing a wide variety of styles--from traditional Native American chants to an Inuit collaboration with Bj rk--that are
referenced in the book and available as an iMix at www.oup.com/us/globalmusic.