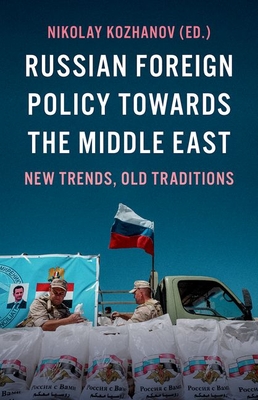 
Backordered - ETA Unknown
This book cannot be returned, cancelled, or exchanged. Please call for availability and pricing
This book sheds light on Russia's motives in the Middle East, examining its growing role in the region and its efforts to defend its national interests. As one of the first volumes to address both domestic and external drivers, it provides a valuable multi-dimensional account of Moscow's
foreign policy. Russian Foreign Policy Towards the Middle East also traces the historical evolution of Russia's presence in the region, comparing Moscow's current vision of its diplomatic priorities with the strategic goals of the Soviet Union. Diverse case studies reveal areas of both divergence and convergence between Russia and various Middle Eastern players on a range of issues, including the Syrian Civil War, Iran's regional activities and the Yemeni conflict. In an era of renewed global tensions, this volume provides an important
corrective to the notion that Russia's Cold War-era confrontation with 'the West' determines its contemporary approach to the Middle East. No less important are economic interests and domestic security considerations, which push Moscow towards greater interaction with the region. Only by examining
both new trends and old traditions can we understand Russia's significance as a global player today.

Nikolay Kozhanov is Research Associate Professor at the Gulf Studies Center, Qatar University. He is a consulting fellow for the Russia and Eurasia Programme at Chatham House, leading a project on Russian foreign policy in the Middle East. His research focuses on Gulf geopolitics, and Iran's economyand international relations.