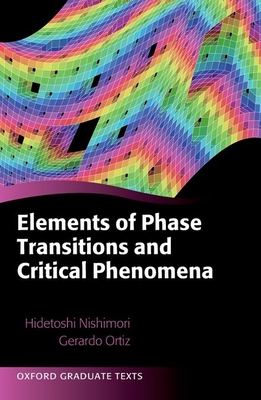 
This title is likely unavailable. Email or call for price and availability.
As an introductory account of the theory of phase transitions and critical phenomena, this book reflects lectures given by the authors to graduate students at their departments and is thus classroom-tested to help beginners enter the field. Most parts are written as self-contained units and every new concept or calculation is explained in detail without assuming prior knowledge of the subject. The book significantly enhances and revises a Japanese version which is a bestseller in the Japenese market and is considered a standard textbook in the field. It contains new pedagogical presentations of field theory methods, including a chapter on conformal field theory, and various modern developments hard to find in a single textbook on phase transitions. Exercises are presented as the topics develop, with solutions found at the end of the book, making the usefil for self-teaching, as well as for classroom learning.

Hidetoshi Nishimori, Department of Physics, Tokyo Institute of Technology, Japan, Gerardo Ortiz, Department of Physics, Indiana University, Bloomington, USA After spending three years as a postdoctoral fellow at Carnegie-Mellon University and Rutgers University in the US, Hidetoshi Nishimori returned to Japan, first as a research associate at Tokyo Institute of Technology. He is now a professor of physics at the same Institute. He received the Nishina Memorial Prize in 2006 for his work on spin glasses. He is a Fellow of Institute of Physics. After receiving his PhD in Theoretical Physics at the Swiss Federal Institute of Technology, Gerardo Oritz continued his career in the US, first as a postdoctoral fellow in the University of Illinois at Urbana-Champaign, and then as an Oppenheimer fellow at the Los Alamos National Laboratory, where he stayed as a permanent staff member until 2006. He is currently Professor of Physics at Indiana University, Bloomington. He is a Fellow of the Institute of Physics.