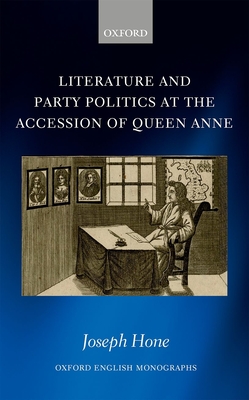 
This title is likely unavailable. Email or call for price and availability.
Literature and Party Politics at the Accession of Queen Anne is the first detailed study of the final Stuart succession crisis. It demonstrates for the first time the centrality of debates about royal succession to the literature and political culture of the early eighteenth century. Using
previously neglected, misunderstood, and newly discovered material, Joseph Hone shows that arguments about Anne's right to the throne were crucial to the construction of nascent party political identities. Literary texts were the principal vehicle through which contemporaries debated the new queen's
legitimacy. This book sheds fresh light on canonical authors such as Daniel Defoe, Alexander Pope, and Joseph Addison by setting their writing alongside the work of lesser known but nonetheless important figures such as John Tutchin, William Pittis, Nahum Tate, John Dennis, Henry Sacheverell,
Charles Leslie, and other anonymous and pseudonymous authors. Through close historical analysis, it shows how this new generation of poets, preachers, and pamphleteers transformed older models of succession writing by Milton, Dryden, and others, and imbued conventional genres such as panegyric and
satire with their own distinctive poetics. By immersing the major authors in their milieu, and reconstructing the political and material contexts in which those authors wrote, Literature and Party Politics demonstrates the vitality of debates about royal succession in early eighteenth-century
culture.
Joseph Hone, Lumley Research Fellow, Magdalene College, University of Cambridge Joseph Hone is the Lumley Research Fellow in English at Magdalene College, Cambridge. His research focuses on the intersections of literature and political culture during the seventeenth and eighteenth centuries. Previously he taught at the University of Oxford and held the Katharine F. PantzerFellowship in Descriptive Bibliography at Harvard University. He has published widely on eighteenth-century literature.