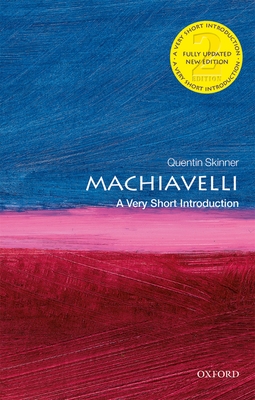 
On Our Shelves as of 9am Today
Niccolo Machiavelli taught that political leaders must be prepared to do evil so that good may come of it, and his name has been a byword ever since for duplicity and immorality. Is his sinister reputation deserved? In answering this question Quentin Skinner traces the course of Machiavelli's adult life, from his time as Second Chancellor of the Florentine republic, during which he met with kings, the pope, and the Holy Roman Emperor; to the fall of the republic in 1512; to his death in 1527. It was after the fall of the Republic that Machiavelli composed his main political works: The Prince, the Discourses, and The History of Florence. In this second edition of his Very Short Introduction Skinner includes new material on The Prince, showing how Machiavelli developed his neo-classical political theory, through engaging in continual dialogue with the ancient Roman moralists and historians, especially Cicero and Livy. The aim of political leaders, Machiavelli argues, should be to act virtuously so far as possible, but to stand ready 'to be not good' when this course of action is dictated by necessity. Exploring the pivotal concept of princely virtu to be found in classical and Renaissance humanist texts, Skinner brings new light to Machiavelli's philosophy of a willingness to do whatever may be necessary - whether moral or otherwise -to maintain a position of power. ABOUT THE SERIES: The Very Short Introductions series from Oxford University Press contains hundreds of titles in almost every subject area. These pocket-sized books are the perfect way to get ahead in a new subject quickly. Our expert authors combine facts, analysis, perspective, new ideas, and enthusiasm to make interesting and challenging topics highly readable.

Quentin Skinner was born in 1940 and educated at Gonville and Caius College Cambridge, where he is now an Honorary Fellow. Between 1974 and 1979 he was a Fellow at the Institute for Advanced Study at Princeton, before returning to Cambridge as Professor of Political Science. He was appointed Regius Professor of History at Cambridge in 1996, a post he held until he moved to Queen Mary University of London in 2008. He is a Fellow of the British Academy and a foreign member of many other national academies, including the Academia Europea. He is the author of a number of books, including The Foundation of Political Thought (Cambridge, 1978), and From Humanism to Hobbes: studies in rhetoric and politics (Cambridge, 2018), and his scholarship has won him many awards, such as the Isaiah Berlin Prize, The Wolfson History Prize, and two awards from the American Political Science Association.