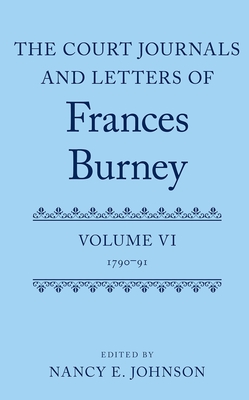 
This title is likely unavailable. Email or call for price and availability.
The Court Journals and Letters of Frances Burney, 1790-91, is the sixth and final volume of Frances Burney's court journals and letters published by Oxford University Press. The journals and letters in this volume record Frances Burney's final eighteen months as Keeper of the Robes in Queen
Charlotte's court. Burney had arrived at court in July of 1786, a reluctant but devoted royal servant. She tried to adjust to the isolation and confinement of court, but by 1790 Burney was increasingly distraught and her health was in rapid decline. She suffered a romantic disappointment when the
Queen's Vice-Chamberlain, Col. Stephen Digby, who had befriended her, married a maid of honour, Charlotte Gunning. She was also discouraged when her attempts to secure a headmastership at Charterhouse for her brother Charles, and a ship for her brother James, both failed. She was in a state of
extended nervous exhaustion. Still, despite her debilitations, Burney continued to provide accounts of the Warren Hastings trial, made note of rumours about war with Spain, and occasionally made reference to the turmoil in France. She met James Boswell, encountered her estranged friend Hester
Piozzi, and corresponded with Horace Walpole over the will of her servant Columb. She worked on her historical tragedies, Edwy and Elgiva, Herbert De Vere, The Siege of Pevensey, and Elberta, and she conceived her next novel, Camilla. Yet Burney was determined to leave court. After securing the
approval of her father, she presented a letter of resignation to the queen in December, although it was not until early July of 1791 that she departed Windsor and returned to her life as an author.
Nancy E. Johnson, State University of New York at New Paltz Nancy E. Johnson is Professor of English and Associate Dean of the College of Liberal Arts & Sciences at SUNY New Paltz, where she teaches eighteenth-century literature and literary theory. She has published on British novels and legal theory in the 1790s, narratives and the London treason trials of1794, and Adam Smith's use of narrative in his lectures on jurisprudence. She is currently researching women's concepts of justice in the eighteenth century.