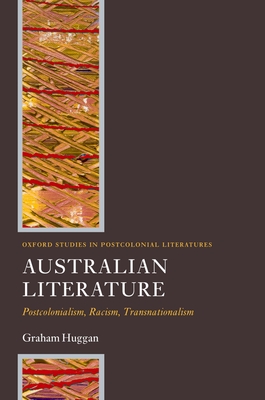 
This title is likely unavailable. Email or call for price and availability.
The Oxford Studies in Postcolonial Literatures series offers stimulating and accessible introductions to definitive topics and key genres and regions within the rapidly diversifying field of postcolonial literary studies in English. In a provocative contribution to the series, Graham Huggan presents fresh readings of an outstanding, sometimes deeply unsettling national literature whose writers and readers just as unmistakably belong to the wider world. Australian literature is not the unique province of Australian readers and critics; nor is its exclusive task to provide an internal commentary on changing national concerns. Huggan's book adopts a transnational approach, motivated by postcolonial interests, in which contemporary ideas taken from postcolonial criticism and critical race theory are productively combined and imaginatively transformed. Rejecting the fashionable view that Australia is not, andthat Australian literature, like other settler literatures, requires close attention to postcolonial methods and concerns. A postcolonial approach to Australian literature, he suggests, is more than just a case for a more inclusive nationalism; it also involves a general acknowledgement of the nation's changed relationship to an increasingly globalized world. As such, the book helps to deprovincialize Australian literary studies. Australian Literature also contributes to debates about the continuing history of racism in Australia-a history in which the nation's literature has played a constitutive role, as both product and producer of racial tensions and anxieties, nowhere more visible than in the discourse it has produced about race, both within and beyond the national context.

Graham Huggan teaches in the School of English at the University of Leeds, where he is Chair of Commonwealth and Postcolonial Literature. An acknowledged world expert in the field of postcolonial literary and cultural studies, he is the author of Territorial Disputes (1994), Peter Carey (1996), and The Postcolonial Exotic (2001).