Disruptive Power: The Crisis of the State in the Digital Age (Oxford Studies in Digital Politics) (Hardcover) 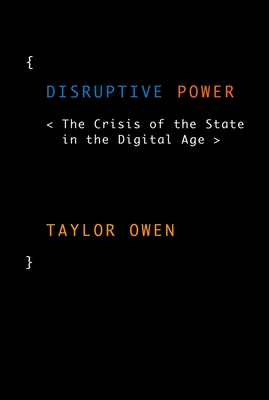 Disruptive Power: The Crisis of the State in the Digital Age (Oxford Studies in Digital Politics) (Hardcover)


Available in Warehouse. Wait for Email Confirmation for ETA
Anonymous. WikiLeaks. The Syrian Electronic Army. Edward Snowden. Bitcoin. The Arab Spring. Digital communication technologies have thrust the calculus of global political power into a period of unprecedented complexity. In every aspect of international affairs, digitally enabled actors are changing the way the world works and disrupting the institutions that once held a monopoly on power. No area is immune: humanitarianism, war, diplomacy, finance, activism, or journalism. In each, the government departments, international organizations and corporations who for a century were in charge, are being challenged by a new breed of international actor. Online, networked and decentralized, these new actors are innovating, for both good and ill, in the austere world of foreign policy. They are representative of a wide range of 21st century global actors and a new form of 21st century power: disruptive power. In Disruptive Power, Taylor Owen provides a sweeping look at the way that digital technologies are shaking up the workings of the institutions that have traditionally controlled international affairs. The nation state system and the subsequent multinational system were founded on and have long functioned through a concentration of power in the state. Owen looks at the tools that a wide range of new actors are using to increasingly control international affairs, and how their rise changes the way we understand and act in the world. He considers the bar for success in international digital action and the negative consequences of a radically decentralized international system. What new institutions will be needed to moderate the new power structures and ensure accountability? And how can governments and corporations act to promote positive behavior in a world of disruptive innovation? Owen takes on these questions and more in this probing and sober look at the frontier of international affairs, in a world enabled by information technology and increasingly led by disruptive innovators. With cutting edge analysis of the fast-changing relationship between the declining state and increasingly powerful non-state actors, Disruptive Power is the essential road map for navigating a networked world.

Taylor Owen is Assistant Professor of Digital Media and Global Affairs at the University of British Columbia and a Senior Fellow at the Columbia Journalism School. He was previously the Research Director of the Tow Center for Digital Journalism at Columbia University where he designed and led a program studying the impact of digital technology on the practice of journalism. He is the founder and Editor-in-Chief of opencanada.org, an award-winning international affairs website, the Director of the International Relations and Digital Technology Projects, an international research project exploring the intersection of information technology and international affairs, and is the Research Director of the Munk Debates. He has previously held positions at Yale University, the London School of Economics and the International Peace Research Institute, Oslo. His PhD is from the University of Oxford, where he was a Trudeau Scholar.