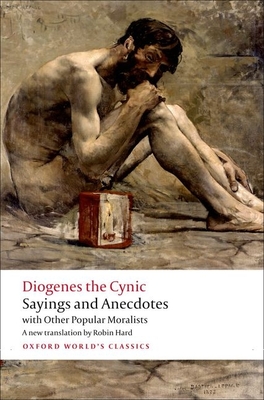 By Diogenes the Cynic, Robin Hard


Backordered - ETA Unknown
Diogenes the Cynic is famed for walking the streets with a lamp in daylight, looking for an honest man. His biting wit and eccentric behavior were legendary, and it was by means of his renowned aphorisms that his moral teachings were transmitted. He scorned the conventions of civilized life, and his ascetic lifestyle and caustic opinions informed the Cynic philosophy and later influenced Stoicism. This unique edition also covers his immediate successors, such as Crates, his wife Hipparchia, and the witty moral preacher Bion. The contrasting teachings of the Cyrenaic school, founded by Aristippos, a pleasure-loving friend of Socrates, complete the volume, together with a selection of apocryphal letters. About the Series: For over 100 years Oxford World's Classics has made available the broadest spectrum of literature from around the globe. Each affordable volume reflects Oxford's commitment to scholarship, providing the most accurate text plus a wealth of other valuable features, including expert introductions by leading authorities, voluminous notes to clarify the text, up-to-date bibliographies for further study, and much more.