Keeping Their Marbles: How the Treasures of the Past Ended Up in Museums - And Why They Should Stay There (Hardcover) 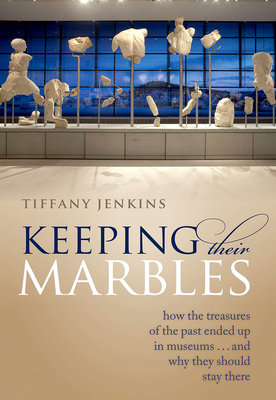 Keeping Their Marbles: How the Treasures of the Past Ended Up in Museums - And Why They Should Stay There (Hardcover)


This title is likely unavailable. Email or call for price and availability.
The fabulous collections housed in the world's most famous museums are trophies from an imperial age. Yet the huge crowds that each year visit the British Museum in London, the Louvre in Paris, or the Metropolitan in New York have little idea that many of the objects on display were acquired by coercion or theft. Now the countries from which these treasures came would like them back. The Greek demand for the return of the Elgin Marbles is the tip of an iceberg that includes claims for the Benin Bronzes from Nigeria, sculpture from Turkey, scrolls and porcelain taken from the Chinese Summer Palace, textiles from Peru, the bust of Nefertiti, Native American sacred objects, and Aboriginal human remains. In Keeping Their Marbles, Tiffany Jenkins tells the bloody story of how western museums came to acquire these objects. She investigates why repatriation claims have soared in recent decades and demonstrates how it is the guilt and insecurity of the museums themselves that have stoked the demands for return. Contrary to the arguments of campaigners, she shows that sending artefacts back will not achieve the desired social change nor repair the wounds of history. Instead, this ground-breaking book makes the case for museums as centres of knowledge, demonstrating that no object has a single home, and no one culture owns culture.
Tiffany Jenkins is an author, academic, broadcaster, and consultant on cultural policy. Her writing credits include the Independent, the Art Newspaper, the Guardian, the Scotsman (for which she was a weekly columnist on social and cultural issues) and the Spectator. She is an Honorary Fellow in Department of Art History at the University of Edinburgh; a former visiting fellow in the Department of Law at the London School of Economics and was previously the director of the Arts and Society Programme at the Institute of Ideas. She competed her PhD in Sociology at the University of Kent and divides her time between London and Edinburgh. She has advised a number of organisations on cultural policy, including Trinity College, Dublin; English Heritage; the British Council; the Norwegian government; the University of Oslo; Norwegian Theatres and Orchestras; and the National Touring Network for Performing Arts, Norway.