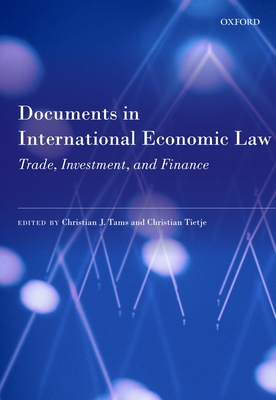 Christian J. Tams is Professor of International Law at the University of Glasgow (U.K.). He is a qualified lawyer in Germany (admitted 2005) and holds LL.M. and Ph.D. degrees from the University of Cambridge. His research in international law focuses on investment protection, the role ofinternational courts and tribunals, and the law of State responsibility. In addition to his academic work, he has advised states in proceedings before the International Court of Justice (ICJ) and the International Tribunal for the Law of the Sea (ITLOS). He is a member of the German Court ofArbitration for Sports and of the ILA Committee on the Use of Force, and has held visiting appointments at universities in China, France and Lithuania. He is an editor of, inter alia, The Convention on the Jurisdictional Immunities of States and Their Property: A Commentary and The Development ofInternational Law by the International Court of Justice. Christian Tietje is Professor (tenure) for European Law and International Economic Law, director of the Institute for Economic Law, and director of the Transnational Economic Law Research Centre (TELC) at the Faculty of Law at Martin Luther University Halle-Wittenberg, Germany. His primary researchinterests lie in the areas of EU common commercial policy and international economic law (world trade law, investment protection and arbitration, global financial markets). He holds LL.M. and Ph.D. (Dr. iur.) degrees from University of Michigan Law School and Universities of Hamburg and of Kiel, Germany. He has published several books and more than 150 articles, mostly on common commercial policy and international economic law. He has advised Governments, international organizations, non-governmental organizations, business associations and multilateral companies in the above mentionedresearch areas and has served as expert witness and legal advisor in several international investment arbitrations.