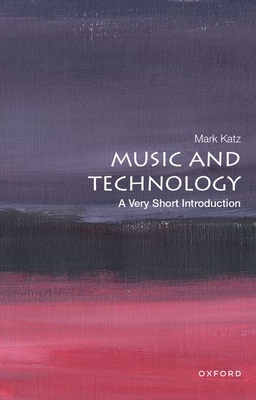 
On Our Shelves as of 9am Today
Mark Katz surveys the age-old interrelationship between music and technology, from prehistoric musical instruments to today's digital playback devices. This Very Short Introduction takes an expansive and inclusive approach meant to broaden and challenge traditional views of music and technology. In its most common use, "music technology" tends to evoke images of twentieth and twenty-first century electronic devices: synthesizers, recording equipment, music notation software, and the like. This volume, however, treats all tools used to create, store, reproduce, and transmit music--new or old, electronic or not--as technologies worthy of investigation. All musical instruments can be considered technologies. The modern piano, for example, is a marvel of keys, hammers, strings, pedals, dampers, and jacks; just the sound-producing mechanism, or action, on a piano has more than 50 different parts. In this broad view, technology in music encompasses instruments, whether acoustic, electric or electronic; engraving and printing; sound recording and playback; broadcasting; software; and much more. Mark Katz challenges the view that technology is unnatural, something external to music. It was sometimes said in the early twentieth century that so-called mechanical music (especially player pianos and phonographs) was a menace to "real" music; alternatively, technology can be freighted with utopian hopes and desires, as happens today with music streaming platforms like Spotify. Positive or negative, these views assume that technology is something that acts upon music; by contrast, this volume characterizes technology as an integral part of all musical activity and portrays traditional instruments and electronic machines as equally technological.

Mark Katz is John P. Barker Distinguished Professor of Music at the University of North Carolina at Chapel Hill and Founding Director of the hip-hop cultural diplomacy program, Next Level. His books include Capturing Sound: How Technology Has Changed Music (2010), Groove Music: The Art and Culture of the Hip-Hop DJ (2012), and Build: The Power of Hip Hop Diplomacy in a Divided World (2019).