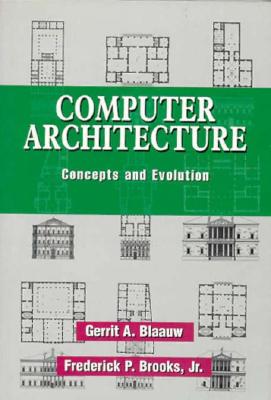 
This title is likely unavailable. Email or call for price and availability.
widely used in manuscript form, Gerrit A. Blaauw and Frederick P. Brooks, Jr. provide a definitive guide and reference for practicing computer architects and for students. The book complements Brooks recently updated classic, The Mythical Man-Month, focusing here on the design of hardware and there on software, here on the content of computer architecture and there on the process of architecture design. The books focus on architecture issues complements Blaauws early work on implementation techniques. Having experienced most of the computer age, the authors draw heavily on their first-hand knowledge, emphasizing timeless insights and observations. Blaauw and Brooks first develop a conceptual framework for understanding computer architecture. They then describe not only what present architectural practice is, but how it came to be so. A major theme is the early divergence and the later reconvergence of computer architectures. They examine both innovations that survived and became part of the standard computer, and the many ideas that were explored in real machines but did not survive. In describing the discards, they also address why these ideas did not make it. The authors goals ar.