Janson's History of Art: The Western Tradition, Volume I (Paperback) 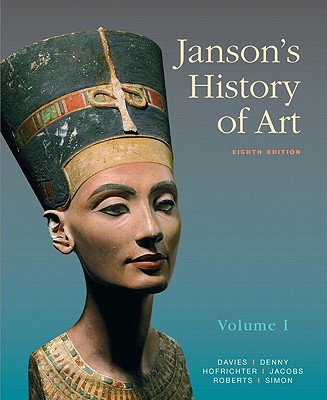 Janson's History of Art: The Western Tradition, Volume I (Paperback)


This title is likely unavailable. Email or call for price and availability.
Fo> "R"ewritten " " "and reorganized, thisnew edition weaves together the most recent scholarship, the most current thinking in art history, and the most innovative online supplements, including digital art library. Experience the new Janson and re-experience the history of art." Long established as the classic and seminal introduction to art of the Western world, theEighth Edition of "Janson's History of Art "is groundbreaking. When Harry Abrams first published the "History of Art" in 1962, John F. Kennedy occupied the White House, and Andy Warhol was an emerging artist. Janson offered his readers a strong focus on Western art, an important consideration of technique and style, and a clear point of view. "The History of Art," said Janson, was not just a stringing together of historically significant objects, but the writing of a story about their interconnections, a history of styles and of stylistic change. Janson's text focused on the visual and technical characteristics of the objects he discussed, often in extraordinarily eloquent language. Janson's "History of Art" helped to establish the canon of art history for many generations of scholars. The newEighth Edition, although revised to remain current with new discoveries and scholarship, continues to follow Janson's lead in important ways: It is limited to the Western tradition, with a chapter on Islamic art and its relationship to Western art. It keeps the focus of the discussion on the object, its manufacture, and its visual character. It considers the contribution of the artist as an important part of the analysis. This edition maintains an organization along the lines established by Janson, with separate chapters on the Northern European Renaissance, the Italian Renaissance, the High Renaissance, and Baroque art, with stylistic divisions for key periods of the modern era. Also embedded in this edition is the narrative of how art has changed over time in the cultures that Europe has claimed as its patrimony.
Penelope J. E. Davies is Associate Professor at the University of Texas, Austin. She is a scholar of Greek and Roman art and architecture as well as a field archaeologist. She is author of "Death and the Emperor: Roman Imperial Funerary Monuments from Augustus to Marcus Aurelius," winner of the Vasari Award. Walter B. Denny is a Professor of Art History at the University of Massachusetts at Amherst. In addition to exhibition catalogues, his publications include books on Ottoman Turkish carpets, textiles, and ceramics, and articles on miniature painting, architecture and architectural decoration. Frima Fox Hofrichter is Professor and former Chair of the History of Art and Design department at Pratt Institute. She is author of "Judith Leyster, A Dutch Artist in Holland s Golden Age," which received CAA s Millard Meiss Publication Fund Award. Joseph Jacobs is an independent scholar, critic, and art historian of modern art in New York City. He was the curator of modern art at the John and Mable Ringling Museum of Art in Sarasota, Florida, director of the Oklahoma City Art Museum, and curator of American art at The Newark Museum, Newark, New Jersey. David L. Simon is Jette Professor of Art at Colby College, where he received the Basset Teaching Award in 2005. Among his publications is the catalogue of Spanish and southern French Romanesque sculpture in the Metropolitan Museum of Art and The Cloisters. Ann M. Roberts, Professor of Art at Lake Forest College has published essays, articles and reviews on both Northern and Italian Renaissance topics. Her research focuses on women in the Renaissance, and her most recent publication is entitled "Dominican Women and Renaissance Art: The Convent of San Domenico of Pisa." H. W. Janson was a legendary name in art history. During his long career as a teacher and scholar, he helped define the discipline through his impressive books and other publications. Anthony F. Janson forged a distinguished career as a professor, scholar, museum professional and writer. From the time of his father s death in 1982 until 2004, he authored "History of Art.""