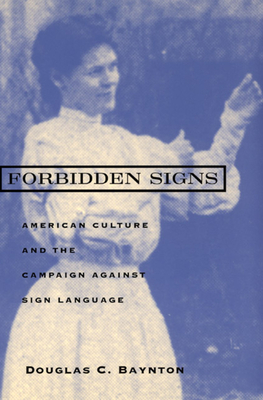 Forbidden Signs explores American culture from the mid-nineteenth century to 1920 through the lens of one striking episode: the campaign led by Alexander Graham Bell and other prominent Americans to suppress the use of sign language among deaf people.

The ensuing debate over sign language invoked such fundamental questions as what distinguished Americans from non-Americans, civilized people from "savages," humans from animals, men from women, the natural from the unnatural, and the normal from the abnormal. An advocate of the return to sign language, Baynton found that although the grounds of the debate have shifted, educators still base decisions on many of the same metaphors and images that led to the misguided efforts to eradicate sign language.

"Baynton's brilliant and detailed history, Forbidden Signs, reminds us that debates over the use of dialects or languages are really the linguistic tip of a mostly submerged argument about power, social control, nationalism, who has the right to speak and who has the right to control modes of speech."—Lennard J. Davis, The Nation

"Forbidden Signs is replete with good things."—Hugh Kenner, New York Times Book Review
Douglas C. Baynton is professor of history at the University of Iowa, where he also teaches courses in the American Sign Language program.