Having People, Having Heart: Charity, Sustainable Development, and Problems of Dependence in Central Uganda (Paperback) 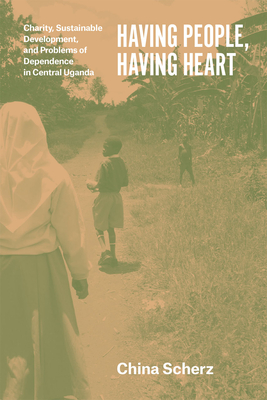 Having People, Having Heart: Charity, Sustainable Development, and Problems of Dependence in Central Uganda (Paperback)

Believing that charity inadvertently legitimates social inequality and fosters dependence, many international development organizations have increasingly sought to replace material aid with efforts to build self-reliance and local institutions. But in some cultures—like those in rural Uganda, where Having People, Having Heart takes place—people see this shift not as an effort toward empowerment but as a suspect refusal to redistribute wealth. Exploring this conflict, China Scherz balances the negative assessments of charity that have led to this shift with the viewpoints of those who actually receive aid.

Through detailed studies of two different orphan support organizations in Uganda, Scherz shows how many Ugandans view material forms of Catholic charity as deeply intertwined with their own ethics of care and exchange. With a detailed examination of this overlooked relationship in hand, she reassesses the generally assumed paradox of material aid as both promising independence and preventing it. The result is a sophisticated demonstration of the powerful role that anthropological concepts of exchange, value, personhood, and religion play in the politics of international aid and development.
China Scherz is assistant professor of anthropology at the University of Virginia.
“Scherz contrasts the group that she calls Hope Child, a local NGO committed to the paradigm of sustainable development, with the work of the Franciscan sisters of Mercy House, a home for vulnerable children, the disabled, and the elderly. By placing these organizations alongside each other, Scherz is able to bring out the underlying logics of exchange that inform charity and sustainable development, as well as the techniques and technologies that transform these logics into projects of ethical self-formation. . . . In the final paragraphs of her book, Scherz urges readers who are concerned with helping the poor to position themselves in such a way as to make relationships of dependence possible, to ‘[be] someone others might attach themselves to.’ This is a radical revaluation of the term ‘dependence,’ which has so long been the bugbear of development efforts. Rather than willing those in poverty to be able to help themselves, one commits to being a helper; rather than decrying such assistance as unsustainable, one commits to sustaining it. Here small acts emerge as compelling because they are socially productive, giving rise to the sort of relationships that have the power to effect real change—change that, importantly, resonates especially well in many of the places where development projects are positioned.”