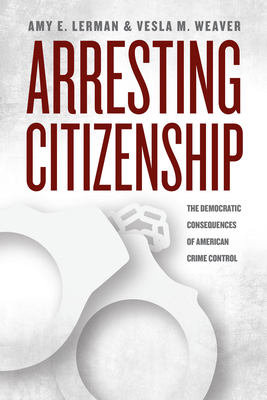 The numbers are staggering: One-third of America’s adult population has passed through the criminal justice system and now has a criminal record. Many more were never convicted, but are nonetheless subject to surveillance by the state. Never before has the American government maintained so vast a network of institutions dedicated solely to the control and confinement of its citizens.
A provocative assessment of the contemporary carceral state for American democracy, Arresting Citizenship argues that the broad reach of the criminal justice system has fundamentally recast the relation between citizen and state, resulting in a sizable—and growing—group of second-class citizens. From police stops to court cases and incarceration, at each stage of the criminal justice system individuals belonging to this disempowered group come to experience a state-within-a-state that reflects few of the country’s core democratic values. Through scores of interviews, along with analyses of survey data, Amy E. Lerman and Vesla M. Weaver show how this contact with police, courts, and prisons decreases faith in the capacity of American political institutions to respond to citizens’ concerns and diminishes the sense of full and equal citizenship—even for those who have not been found guilty of any crime. The effects of this increasingly frequent contact with the criminal justice system are wide-ranging—and pernicious—and Lerman and Weaver go on to offer concrete proposals for reforms to reincorporate this large group of citizens as active participants in American civic and political life.
Amy E. Lerman is professor of public policy and political science at the University of California, Berkeley. She is also associate dean of the Goldman School of Public Policy and codirector of The People Lab at the University of California, Berkeley.

Vesla M. Weaver is assistant professor in the Department of African American Studies and the Department of Political Science at Yale University. She is coauthor of Creating a New Racial Order.
“Arresting Citizenship is a landmark book. It shines a bright light on the myriad ways that criminal justice policies are undermining American democracy. It is also an exemplary piece of social science research that combines coherent and powerful empirical analysis with impassioned calls to recognize injustice in our midst. This book will be tremendously important and a must-read for scholars working in relevant areas of the social sciences.”

“Amy E. Lerman and Vesla M. Weaver have written a fabulous book that makes the original and important argument that the criminal justice system is rife with racial and economic inequalities and strips those who enter it of many basic rights of citizenship. In doing so, they address a breathtaking range of issues concerning contemporary criminal justice and connect these issues brilliantly to give a clear and compelling discussion of how institutions have helped create a new class of disempowered citizens.”
— Jeff Manza, New York University

“Arresting Citizenship is a powerful reminder of the work that needs to be done to preserve and expand the democratic principles of voice, responsiveness, and accountability.”
— Prison Policy Initiative

"Lerman and Weaver rigorously document how all types of contact with criminal justice institutions, ranging from police surveillance to incarceration, have transformed citizenship and democracy in America. Their intriguing and pathbreaking findings complicate our understanding of the carceral state and have broad implications for political inequality. . . . Well-written and thoughtfully researched, [the] book is a welcome addition to the rapidly growing social science literature on the collateral consequences of mass incarceration in the United States."
— American Journal of Sociology

“While conversations on citizenship and punishment tend to highlight felon disenfranchisement, Lerman and Weaver take us from the voting booth to ‘the everyday machinery of our modern democracy,’ where a class of what they call ‘custodial citizens’ might retain voting rights but nonetheless ‘move through their daily lives with the expectation and experience of police contact’ and ‘experience firsthand being a suspect, convict, inmate, or offender.’”
— Naomi Murakawa, Princeton University

“As the authors persuasively demonstrate in Arresting Citizenship, the vast number of custodial citizens and the vast controls and pernicious stigmas they must negotiate on a daily basis raise deeply troubling questions about the health of democratic institutions in the United States and about the character of the liberal state. Lerman and Weaver artfully mine a trove of general survey data and original interview data to document in mournful detail how millions of custodial citizens face powerful barriers to full citizenship that are largely invisible to the wider public but are politically, socially, and economically debilitating.”
— Marie Gottschalk, University of Pennsylvania

“Arresting Citizenship is a compelling piece of scholarship that takes a hard look at the failings of US democracy and US crime control. . . . The authors bring together key sociological insights on socialization and stigma to show how respondents who had had contact with the criminal justice system were less likely to vote (even when voting rights were restored), to be civically engaged, to believe in their own efficacy, or to trust government. . . . Lerman and Weaver write with a sense of urgency and purpose, and they provide us both with a useful framework for understanding the nature of this dilemma, and with a toolkit for taking action. It is an essential text for any conversation going forward about penal reform.”
— Contemporary Sociology

“Lerman and Weaver make a significant contribution. They use survey results and interviews to reveal the civic attitudes of the group they call ‘custodial citizens’: not just those behind bars, but also those on probation, on parole, or who simply reside in heavily policed neighborhoods.”