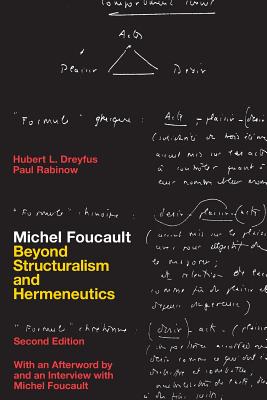 This book, which Foucault himself has judged accurate, is the first to provide a sustained, coherent analysis of Foucault's work as a whole.

To demonstrate the sense in which Foucault's work is beyond structuralism and hermeneutics, the authors unfold a careful, analytical exposition of his oeuvre. They argue that during the of Foucault's work became a sustained and largely successful effort to develop a new method—"interpretative analytics"—capable fo explaining both the logic of structuralism's claim to be an objective science and the apparent validity of the hermeneutical counterclaim that the human sciences can proceed only by understanding the deepest meaning of the subject and his tradition.

"There are many new secondary sources [on Foucault]. None surpass the book by Hubert Dreyfus and Paul Rabinow. . . . The American paperback edition contains Foucault's 'On the Genealogy of Ethics,' a lucid interview that is now our best source for seeing how he construed the whole project of the history of sexuality."—David Hoy, London Review of Books

Paul Rabinow (1944-2021) was a professor of anthropology at the University of California, Berkeley.