Preserving the Spell: Basile's "The Tale of Tales" and Its Afterlife in the Fairy-Tale Tradition (Hardcover) 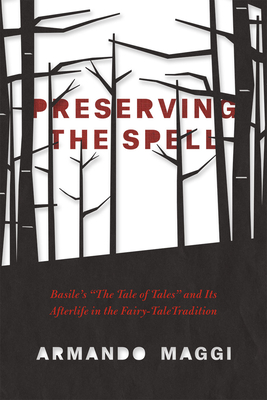 Preserving the Spell: Basile's "The Tale of Tales" and Its Afterlife in the Fairy-Tale Tradition (Hardcover)

Fairy tales are supposed to be magical, surprising, and exhilarating, an enchanting counterpoint to everyday life that nonetheless helps us understand and deal with the anxieties of that life. Today, however, fairy tales are far from marvelous—in the hands of Hollywood, they have been stripped of their power, offering little but formulaic narratives and tame surprises.

If we want to rediscover the power of fairy tales—as Armando Maggi thinks we should—we need to discover a new mythic lens, a new way of approaching and understanding, and thus re-creating, the transformative potential of these stories. In Preserving the Spell, Maggi argues that the first step is to understand the history of the various traditions of oral and written narrative that together created the fairy tales we know today. He begins his exploration with the ur-text of European fairy tales, Giambattista Basile’s The Tale of Tales, then traces its path through later Italian, French, English, and German traditions, with particular emphasis on the Grimm Brothers’ adaptations of the tales, which are included in the first-ever English translation in an appendix. Carrying his story into the twentieth century, Maggi mounts a powerful argument for freeing fairy tales from their bland contemporary forms, and reinvigorating our belief that we still can find new, powerfully transformative ways of telling these stories.
Armando Maggi is professor of romance languages and literatures and a member of the Committee on the History of Culture at the University of Chicago. He is the author of several books, including Satan’s Rhetoric and The Resurrection of the Body: Pier Paolo Pasolini from Sade to Saint Paul, both published by the University of Chicago Press.
“A wonderfully original work. Maggi’s analysis is erudite but adventurous, and he is an exacting, inquisitive, and often brilliant, reader. He combines and links the macroscopic—the consideration of major questions in literary and cultural history—and the microscopic—extended close readings—in exemplary fashion. This is a book about fairy tales, but it is also an extended reflection on the fundamental human activity of narration itself—why and how we tell tales, and how these tales transform over time.”
— Nancy L. Canepa, Dartmouth College

“Maggi's Preserving the Spell is a highly erudite and enthusiastic study of the influence of the fairy tale in western culture. Beginning with the fabulous Giambattista Basile's ‘dirty’ carnavalesque collection, The Tale of Tales, Maggi moves backward to the myths and stories of the Greco-Roman period and forward to tales, memoirs, and films of our contemporary world to demonstrate how fairy tales have tenaciously informed and formed our lives. He is a brilliant and perceptive critic who has grasped the ebb and flow of oral and literary traditions infused by Basile's spirit. In short, Maggi's incisive study should be compulsory reading for all students and scholars seriously interested in the magic and history of fairy tales.”
— Jack Zipes, Professor Emeritus, University of Minnesota

“Giambattista Basile’s The Tale of Tales deserves more critical attention, and refreshingly Maggi treats it as key to fairy-tale intertextuality from Apuleius to the Grimms, Robert Coover, and contemporary memoirs. Focused on how irreverence, real-life traumas, and inventive transformations have animated fairy-tale magic across history, Preserving the Spell’s erudite readings are sure to provoke scholarly discussion.”
— Cristina Bacchilega, author of Fairy Tales Transformed?: Twenty-First-Century Adaptations and the Politics of Wonder

“Folklore can tick and whirr just as smoothly in modern times as in times past, and Maggi shows us how and why. Resisting the tendency to fetishize ideal types and create rigid canons, he embraces the transformative energy of magic and malleability in fairy tales. Preserving the Spell moves us out of our intellectual comfort zones and reminds us that the best stories have a high quotient of weirdness.”
— Maria Tatar, editor of The Annotated Brothers Grimm

“Several studies of the Italian forebears of present-day fairy tales have recently been published—works by Canepa, Zipes, and Bottigheimer. Maggi goes beyond those studies, offering what is essentially a study of intertextuality: one travels through the centuries, alerted to revisions/rewriting/riffing on the Cupid and Psyche myth. Maggi includes Germans Clemens Brentano, the Grimm brothers, and Novalis and then follows the trail/tale into the postmodern with analyses of works by Robert Coover and Stanley Elkin, memoirs inflected with fairy tale tropes, and the 2012 film Beasts of the Southern Wild. Footnotes citing French, German, Italian, and English sources reveal Maggi’s deep familiarity with the robust scholarship on fairy tales of the past three decades. An appendix provides Maggi’s translations of the Grimm brothers’ versions of 50 Basile tales. . . . Highly recommended.”
— Choice

“Preserving the Spell is a polymathic book that fuses cinematic, historical, literary, philosophical, political, and psychological approaches in an examination of the long, complex tradition of the oral and literary fairy tale; the result is engaging and provocative. . . . Maggi is as adept at close literary analysis as he is insightful at making broader claims about the transformative power of narrative. Preserving the Spell is a generous and highly informative foray into the fairy-tale tradition and a persuasive call to perpetuate its strangeness and magic.”
— Renaissance Quarterly