The Medieval Invention of Travel (Paperback) 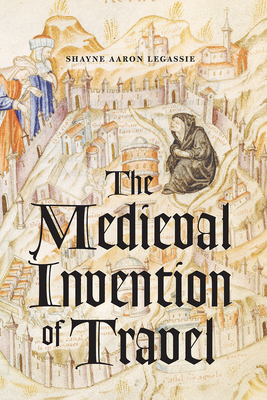 The Medieval Invention of Travel (Paperback)

Over the course of the Middle Ages, the economies of Europe, Asia, and northern Africa became more closely integrated, fostering the international and intercontinental journeys of merchants, pilgrims, diplomats, missionaries, and adventurers. During a time in history when travel was often difficult, expensive, and fraught with danger, these wayfarers composed accounts of their experiences in unprecedented numbers and transformed traditional conceptions of human mobility.

Exploring this phenomenon, The Medieval Invention of Travel draws on an impressive array of sources to develop original readings of canonical figures such as Marco Polo, John Mandeville, and Petrarch, as well as a host of lesser-known travel writers. As Shayne Aaron Legassie demonstrates, the Middle Ages inherited a Greco-Roman model of heroic travel, which viewed the ideal journey as a triumph over temptation and bodily travail. Medieval travel writers revolutionized this ancient paradigm by incorporating practices of reading and writing into the ascetic regime of the heroic voyager, fashioning a bold new conception of travel that would endure into modern times. Engaging methods and insights from a range of disciplines, The Medieval Invention of Travel offers a comprehensive account of how medieval travel writers and their audiences reshaped the intellectual and material culture of Europe for centuries to come.
Shayne Aaron Legassie is associate professor of English and comparative literature at the University of North Carolina at Chapel Hill. He is coeditor of Cosmopolitanism and the Middle Ages.
“This is an extremely ambitious and accomplished piece of work. Drawing connections among different subgenres, Legassie develops a comprehensive, densely historicized, and theoretically sophisticated argument that moves the study of medieval travel writing into new, unexplored territory.”
— Steven F. Kruger, Queens College and Graduate Center, City University of New York

"Legassie’s engaging book concentrates on three kinds of travel, and on the literary records inspired by each: exotic voyages to the Far East, pilgrimage to the Holy Land, and European journeys undertaken for self-betterment, anticipating the 18th-century Grand Tour."
— London Review of Books

“Legassie has written an ambitious, wide-ranging book that challenges the traditional periodization of this field.”
— Choice

“An intrepid and thorough explanation for the myriad uses medieval writers found for accounts of their adventures.”
— Times Literary Supplement

“Before planes, railways, or steamships, [travel] was inseparable from its etymological twin, travail—both derived from the name of an ancient Roman instrument of torture. . . . Yet travel, for all its hardships, fascinated medieval readers: the most celebrated poems of the age are both travel narratives. . . . An engaging book.”
— London Review of Books

“Legassie’s The Medieval Invention of Travel evinces that travel writing from 1200 to 1500 was erudite, studious, and original. His book has the same admirable qualities, all convincingly and clearly presented, sometimes playfully. . . . Well worth reading.”
— The Medieval Review

“Shayne Aaron Legassie’s first monograph is a bold, refreshing, well-researched, and well-written take on his subject. . . . Thoughtful and stimulating . . . . Surefooted . . . . He tells us a compelling new story about the writing and culture of travel in the later Middle Ages and their hitherto-unrecognized modes of connectivity with prior and later eras, all without lapsing into a teleological narrative. This volume is likely to become essential reading for scholars and students in the field.”

"Legassie admirably unpacks the variety and complexity of medieval travel narratives....Through the lens of travel narratives, Legassie totally dismantles any assumption of the Middle Ages’ 'aversion to empiricism, its disinterest in individual experience, and its dogmatic fixation of theological authority'."
— American Historical Review

"The Medieval Invention of Travel is valuable primarily for its often insightful and persuasive readings of a broad range of canonical texts that shaped the history of medieval travel literature...[T]he focus on the impact of literacy and literary practices....produces intriguing new perspectives and insights."
— Speculum

"The Medieval Invention of Travel is a stimulating book that opens new lines of inquiry in the field of medieval travel, confirming the importance of this field for examining the evolution of European epistemologies through their interaction with geographic distance and cultural alterity. It will be a valuable reading for those interested in medieval travel literature, pilgrimage, post-medieval travel, epistemological changes in late medieval Europe, and anthropological approaches to cross-cultural exchanges in the premodern world."
— Luis Miguel dos Santos

"The book is successful in achieving its aims and does open some interesting avenues for future research... there is much that is stimulating about this book and it does well to outline innovative models for understanding the way in which European writers invented an idea of travel in the Middle Ages."
— Philip Booth