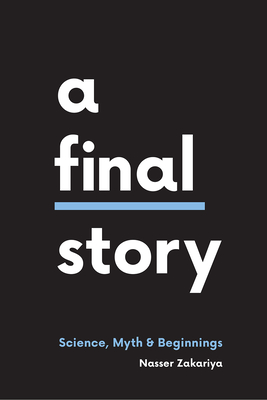 
This title is likely unavailable. Email or call for price and availability.
Popular science readers embrace epics—the sweeping stories that claim to tell the history of all the universe, from the cosmological to the biological to the social. And the appeal is understandable: in writing these works, authors such as E. O. Wilson or Steven Weinberg deliberately seek to move beyond particular disciplines, to create a compelling story weaving together natural historical events, scientific endeavor, human discovery, and contemporary existential concerns.

In A Final Story, Nasser Zakariya delves into the origins and ambitions of these scientific epics, from the nineteenth century to the present, to see what they reveal about the relationship between storytelling, integrated scientific knowledge, and historical method. While seeking to transcend the perspectives of their own eras, the authors of the epics and the debates surrounding them are embedded in political and social struggles of their own times, struggles to which the epics in turn respond. In attempts to narrate an approach to a final, true account, these synthesizing efforts shape and orient scientific developments old and new. By looking closely at the composition of science epics and the related genres developed along with them, we are able to view the historical narrative of science as a form of knowledge itself, one that discloses much about the development of our understanding of and relationship to science over time.
Nasser Zakariya is assistant professor of history and rhetoric of science at the University of California, Berkeley.

"This book is grandly ambitious. Its mission is to trace the development of genres of synthesis that present a totalizing history of the universe using the registers and categories of myth and epic. . . . The book begins with classic thinkers who laid the philosophical groundwork for what we now call science and ends with recent television series about science. From Kant and Laplace to Carl Sagan and Neil deGrasse Tyson: this book about totalizing ambitions itself displays totalizing ambition—and carries it off impressively. . . . [Zakariya] takes the reader down multiple pathways of biography, textual analysis, intellectual history, and rhetorical theory, among others. . . . His thoughtfulness and range, combined with precision in language and depth of scholarly research, make this book itself an impressive feat of synthesis that should be read by historians of science and technology, as well as scholars of rhetoric, intellectual history, and media studies, among many others."
— Isis, a Journal of the History of Science Society

"I can’t recommend Nasser Zakariya’s A Final Story highly enough. . . . Zakariya’s treatment is solid, so much so that, rather than selectively explore parts of his book, I recommend letting A Final Story speak for itself. . . . For anyone who wants to participate in this discussion, Zakariya’s book provides the solid historical background that can help us examine whether it does make sense to replace the assumptions of scientific materialism with those of the new model. Too much is at stake, for us and our grandchildren, to turn away from this task."
— Journal of Big History

"This book is a must for scholars in both the sciences and the humanities. . . . The reader travels through Zakariya’s mindfully researched and vividly written tales of the attempt to stage the construction of a whole of knowledge, of everything."
— Journal of the History of Ideas Blog

“A Final Story casts welcome new light on current debates over the ambition of writing human history on the grandest scale. Zakariya has laid bare the shared intellectual genealogy for projects as diverse as Big History, NASA’s search for extraterrestrial life, and the Superconducting Supercollider. This marvelously original book will change the way we think about cosmology’s modern history, from the nebular hypothesis to the Higgs boson.”

“An original, stimulating, and thought-provoking book, which in addition to its narrative history, analyzes many themes, ranging from the relations among the sciences, to the social sciences and the implications for human action. It also addresses the ‘continuity problem’: whether the parts of universal history such as physical, biological and cultural can be connected in a meaningful way. The vast sweep of this history over two centuries allows the author to make connections never before realized.”
— Steven J. Dick, Former NASA Chief Historian

"Nasser Zakariya has written an insightful, erudite, historical account of generalist scholars—the lumpers—who have tried mainly over the past century to unify science amidst the majority of specialist researchers—the splitters.  Of course, both lumpers and splitters are needed to gain ever-better approximations of reality, and Zakariya does a credible job relating the progress of the natural-science synthesizers.  Highly recommended to anyone seriously interested in the broadest view of the biggest picture."
— Eric J. Chaisson, Harvard-Smithsonian Center for Astrophysics