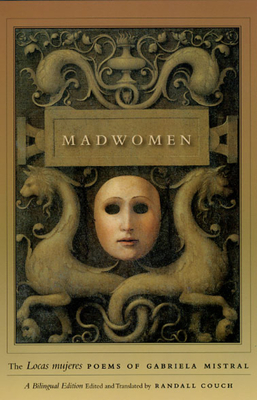 A schoolteacher whose poetry catapulted her to early fame in her native Chile and an international diplomat whose boundary-defying sexuality still challenges scholars, Gabriela Mistral (1889–1957) is one of the most important and enigmatic figures in Latin American literature of the last century. The Locas mujeres poems collected here are among Mistral’s most complex and compelling, exploring facets of the self in extremis—poems marked by the wound of blazing catastrophe and its aftermath of mourning.
From disquieting humor to balladlike lyricism to folkloric wisdom, these pieces enact a tragic sense of life, depicting “madwomen” who are anything but mad. Strong and intensely human, Mistral’s poetic women confront impossible situations to which no sane response exists. This groundbreaking collection presents poems from Mistral’s final published volume as well as new editions of posthumous work, featuring the first English-language appearance of many essential poems. Madwomen promises to reveal a profound poet to a new generation of Anglophone readers while reacquainting Spanish readers with a stranger, more complicated “madwoman” than most have ever known.
Randall Couch is adjunct professor of English at Arcadia University and an administrator at the University of Pennsylvania. He received Pennsylvania Council on the Arts fellowships in poetry in 2000 and 2008.

"Couch offers a succinct, comprehensive biocritical introduction to Mistral and her 'Locas mujeres' poems, particularly exploring autobiographical issues in the poems. . . . Plentiful information on the rich cross-references . . . in Mistral's poems and on the identities of those to whom Mistral dedicated her poems enhances this volume, which will interest Spanish and English speakers alike."

"A beautiful, hard-bound edition. . . . This volume makes it easy for the bilingual reader to jump back and forth between the original poem and the translation to elucidate the meaning of a particularly sophisticated word or to tease out the meaning of an unfamiliar phrasing in the Spanish."

"Randall Couch has gathered a remarkable collection of Mujeres Locas, the Mad Women pivoting brilliantly within twenty six poems by Gabriela Mistral, taken from previously published and unpublished sources. He has accepted the challenge of setting them forth in English, and one can only respect and applaud his efforts, undertaken with painstaking scholarship and impassioned linguistic acuity."

"Randall Couch's translation of the Locas mujeres of Gabriela Mistral recreates in English some of the most important poems of the past century. Written in the voices of women who are witnesses to war and violence of many kinds, and completed during a period when Mistral herself was such a witness, these poems are at once devastating in their emotional clarity and astonishing in their lyrical beauty and formal complexity. Couch's readers, even those who already know the poems in Spanish, will be grateful to him for the sympathetic care he has brought to the tasks of editing, introducing, and translating this distinguished edition of Mistral's work."
— Susan Stewart

"Utterly remarkable--Gabriela Mistral turns out to be a great poet of modernist intensities and compactness, and darker preoccupations, as well as being that more conventional 'pastoral' poet who was awarded the Nobel Prize. Randall Couch's translations are sonically superb--he has an almost uncanny ability to create a rhythm in English lines that not only is very pleasing and authoritative in itself but also makes for an excellent representation of Mistral’s own rhythms."
— Reginald Gibbons, Northwestern University

"This collection deploys the best of the best, revealing for the first time these poems of anguish and triumph from the winner of the 1945 Nobel Prize in Literature. Randall Couch matches her brilliance, depth and range. Here is her direct witness to war and Holocaust, dispatched from Southern France and Brazil, her revisions of Greek tragedy, written in occupied Europe, and her serene and uncompromising, Buddhist-Franciscan defense of the land and indigenous cultures. Here, in stunningly contemporary terms, is the protean complexity of one of the greatest poets of the 20th century."