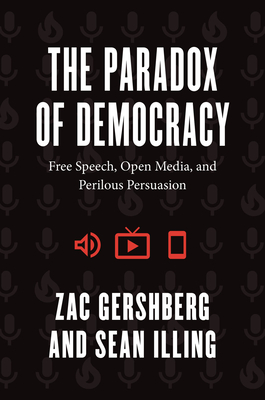 
Available in Warehouse. Wait for Email Confirmation for ETA
A thought-provoking history of communications that challenges ideas about freedom of speech and democracy.

At the heart of democracy lies a contradiction that cannot be resolved, one that has affected free societies since their advent: Though freedom of speech and media has always been a necessary condition of democracy, that very freedom is also its greatest threat. When new forms of communications arrive, they often bolster the practices of democratic politics. But the more accessible the media of a society, the more susceptible that society is to demagoguery, distraction, and spectacle. Tracing the history of media disruption and the various responses to it over time, Zac Gershberg and Sean Illing reveal how these changes have challenged democracy—often with unsettling effects.

The Paradox of Democracy captures the deep connection between communication and political culture, from the ancient art of rhetoric and the revolutionary role of newspapers to liberal broadcast media and the toxic misinformation of the digital public sphere. With clear-eyed analysis, Gershberg and Illing show that our contemporary debates over media, populism, and cancel culture are not too different from democratic cultural experiences of the past. As we grapple with a fast-changing, hyper-digital world, they prove democracy is always perched precipitously on a razor’s edge, now as ever before.
Zac Gershberg is associate professor of journalism and media studies at Idaho State University.

Sean Illing is a senior writer at Vox and the host of its Conversations podcast. He lives in Gulfport, Mississippi.
"A book that provides valuable context for the latest assaults on democracy. . . . A clear and informative history."
— Kirkus Reviews

"A compelling and sober-minded assessment of our situation, and I commend it to you for your consideration."
— L. M. Sacasas

"In The Paradox of Democracy: Free Speech, Open Media, and Perilous Persuasion, Gershberg and Illing suggest that democracy isn’t really about the rules and institutions that usually leap to mind... Fundamentally, they say, democracy is a culture of free and open communication. And that openness makes it vulnerable to subversion from within."
— The Boston Globe

"We are living through an information revolution, but we have not adequately understood how this tsunami reshapes democratic politics. Sean Illing and Zac Gershberg do just that in this very interesting and intriguing book."
— Fareed Zakaria, CNN

"The Paradox of Democracy is as provocative as it is unpredictable. It carefully and engagingly expands our understanding of how democracy works—and struggles—in a society where free expression is foundational and where media is undergoing revolutionary and rapid change. It will change how you think."
— Margaret Sullivan, Washington Post

"As free speech advocates strain to reconcile the unparalleled access to information and the expression of ideas made possible by the internet with their undeniable potential for political, psychological, and even physical harm, Gershberg and Illing have come to say that these advocates are pushing a Sisyphean boulder up a mountainside... Though the authors insist that democracy is the best system there is, they clearly doubt, in Benjamin Franklin's words, 'we can keep it.' ... Recommended."
— Choice