The Nutmeg's Curse: Parables for a Planet in Crisis (Hardcover) 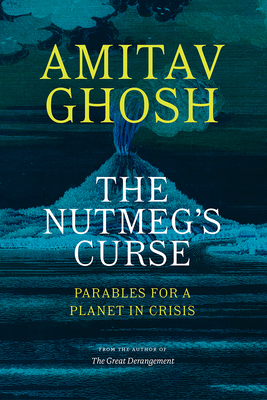 The Nutmeg's Curse: Parables for a Planet in Crisis (Hardcover)


Available in Warehouse. Wait for Email Confirmation for ETA
In this ambitious successor to The Great Derangement, acclaimed writer Amitav Ghosh finds the origins of our contemporary climate crisis in Western colonialism’s violent exploitation of human life and the natural environment.

A powerful work of history, essay, testimony, and polemic, Amitav Ghosh’s new book traces our contemporary planetary crisis back to the discovery of the New World and the sea route to the Indian Ocean. The Nutmeg’s Curse argues that the dynamics of climate change today are rooted in a centuries-old geopolitical order constructed by Western colonialism. At the center of Ghosh’s narrative is the now-ubiquitous spice nutmeg. The history of the nutmeg is one of conquest and exploitation—of both human life and the natural environment. In Ghosh’s hands, the story of the nutmeg becomes a parable for our environmental crisis, revealing the ways human history has always been entangled with earthly materials such as spices, tea, sugarcane, opium, and fossil fuels. Our crisis, he shows, is ultimately the result of a mechanistic view of the earth, where nature exists only as a resource for humans to use for our own ends, rather than a force of its own, full of agency and meaning.

Writing against the backdrop of the global pandemic and the Black Lives Matter protests, Ghosh frames these historical stories in a way that connects our shared colonial histories with the deep inequality we see around us today. By interweaving discussions on everything from the global history of the oil trade to the migrant crisis and the animist spirituality of Indigenous communities around the world, The Nutmeg’s Curse offers a sharp critique of Western society and speaks to the profoundly remarkable ways in which human history is shaped by non-human forces.

Amitav Ghosh is a novelist and essayist whose many books include the acclaimed Ibis Trilogy (Sea of Poppies, River of Smoke, and Flood of Fire), Gun Island, Jungle Nama: A Story of the Sundarban, and The Great Derangement: Climate Change and the Unthinkable, the latter also published by the University of Chicago Press.

"The effect of Ghosh’s archival research, far-flung travel reporting, deep thinking, and eloquent writing is at once enlightening and depressing. There are plenty of debates to be had with some of his analyses and conclusions, but I bet you will come away thinking he’s more right than he is wrong, and you will understand the climate catastrophe in a new way."
— Carnegie Endowment for International Peace

"Illuminating. . . . [Ghosh] wants us to reckon with broader structures of power, involving 'the physical subjugation of people and territory,' and, crucially, the 'idea of conquest, as a process of extraction.' The world-as-resource perspective not only depletes our environment of the raw materials we seek; it ultimately depletes it of meaning."
— New Yorker

"Amitav Ghosh’s new masterwork. . . . The Nutmeg’s Curse is a very big book considering it weighs in at a relatively modest 336 pages. In exploring his theme Ghosh dives into Greek mythology, contemporary geopolitics, classic Dutch literature, American popular culture, the history of botanical science, all in addition to his primary focus, the colonization of several continents over several centuries. His gift for both narrative and exposition make The Nutmeg’s Curse compulsively readable."
— Resilience

"The Nutmeg's Curse is both an unauthorised biography of the spice and a call to reanimate our politics in a way that respects the agency or ‘vitality’ of non-human beings all around us."
— The White Review

"In his book The Nutmeg’s Curse: Parables for a Planet in Crisis, Ghosh weaves together travel writing, personal narrative, historical analysis, and synthesis of expansive scholarship to tell a story about Western empire and the extermination of our world. Ghosh does not deny the links between global capitalism, fossil fuel production, and our warming planet — he is intimately aware, in fact, of how fossil fuels dominate our lives. However, he follows theorists such as W. E. B. Du Bois, Cedric Robinson, and C. L. R. James who argue that capitalist modernity is inseparable from the institutions and logics built through imperial violence toward racialized, colonized peoples."
— Los Angeles Review of Books

"With literary precision, he delves into the history and culture of conquest, drawing a direct line from actions committed hundreds of years ago to the planet’s current predicament. A singular achievement and a title of its time, The Nutmeg’s Curse reminds us why the land is crying."
— Booklist

“A beautiful, harrowing historical essay about mass-mobilizing empathy as the way to undermine the centuries-old drive toward targeted extermination of entire peoples and communities out of greed for ever-more natural resources. Ghosh produced a work that reaches your brain and your heart with unforgettable analytic and moral clarity.”
— Bloomberg, Essential Climate Change Book of the Year, 2021

"In The Nutmeg’s Curse, Amitav Ghosh presents a sweeping historical perspective of the interwoven crises of our times, showing us that our problems are structural, global, and deeply rooted. We can’t say “It’s just capitalism” or “It’s patriarchy” or even “It’s racism”. It is everything about how we have organized this society that is based upon extracting labor and resources from people and places that we have rendered into things."
— Resilience

"Topics such as climate change usually encourage looking into the future, but Amitav Ghosh’s captivating new book, The Nutmeg’s Curse, instead looks back in time, tracing the patterns that gave rise to climate change to the beginnings of colonialism and following those patterns all over the globe."
— American Scientist, Gift Guide 2021

“Reading Amitav Ghosh’s work these last few years, I’ve felt an eerily exciting sense of gratitude. Someone else out there—someone way smarter and more erudite than me—appeared to be chasing the same demons that I was, searching out the beginnings of the climate crisis and the mass extinctions that now afflict our planet, finding them hiding in plain sight, in the converging axes of colonial conquest and capitalist extraction that continue to define our world. Ghosh’s latest, The Nutmeg’s Curse: Parables for a Planet in Crisis, is a work of extraordinary breadth, depth, and brilliance.”
— Ben Ehrenreich

“In this brilliant book, aflame with insight and moral power, Ghosh shows that in the history of the nutmeg lies the path to our planetary crisis, twisting through the horrors of empire and racial capitalism. The Nutmeg’s Curse brings to life alternative visions of human flourishing in consonance with the rest of nature—and reminds us how great are the vested interests that obstruct them.”

“What do you do when the subject matter of life on this planet seems to lack . . . life? You read The Nutmeg’s Curse, which eschews the leaden language of climate expertise in favor of the reanimating powers of mythology, etymology, and cosmology. Ghosh challenges readers to reckon with war, empire, and genocide in order to fully grasp the world-devouring logics that underpin ecological collapse. We owe a great debt to his brilliant mind, avenging pen, and huge soul. Do not miss this book—and above all, do not tell yourself that you already know its contents, because you don’t.”
— Naomi Klein, author of This Changes Everything: Capitalism vs. The Climate

“The Nutmeg's Curse elegantly and audaciously reconceives modernity as a centuries-long campaign of omnicide, against the spirits of the earth, the rivers, the trees, and even the humble nutmeg, then makes an impassioned argument for the keen necessity of vitalist thought and non-human narrative. With sweeping historical perspective and startling insight, Ghosh has written a groundbreaking, visionary call to new forms of human life in the Anthropocene. An urgent and powerful book.”
— Roy Scranton, author of Learning to Die in the Anthropocene: Reflections on the End of a Civilization

“It’s widely recognized that the climate crisis is multi-dimensional, yet American cultural conversations about it are mostly stuck in its scientific, technological, and economic dimensions. In this tour de force, Ghosh defiantly moves the conversation into the realms of history, politics, and culture, insisting that we will never resolve our planetary crisis until we acknowledge that the ‘great acceleration’ of the past fifty years is part of a larger historical pattern of omnicide.cFor centuries, the dominant global powers have seen Earth--its plants, its animals, and its non-white peoples—as brute objects: mute, without agency, and available for the taking and killing. The solution to the climate crisis, Ghosh insists, is not injecting particles into the stratosphere to block the sun, or even to build a bevy of solar farms (as important as the latter is). Rather, the solution lies in re-engaging with the vital aspects of life, in all its capaciousness, and in doing so move past our long history of destruction and into true sustainability.”
— Naomi Oreskes, author of Science on a Mission

"Diagnosing our intricately inter-linked political, economic, and environmental crises, The Nutmeg’s Curse is a book like no other in its combination of moral passion, intellectual rigor, and literary elegance. And from its effortless synthesis of contemporary scholarship and indigenous knowledge systems emerges an irrefutable argument—that we must rethink our fundamental assumptions about human history."

“In The Nutmeg’s Curse, Amitav Ghosh presents a sweeping historical perspective of the interwoven crises of our times, showing us that our problems are structural, global and deeply rooted. We can’t say “It’s just capitalism” or “It’s patriarchy” or even “It’s racism”. It is everything about how we have organized this society that is based upon extracting labor and resources from people and places that we have rendered into things."
— Resilience

"The Nutmeg’s Curse: Parables for a Planet in Crisis by Amitav Ghosh marks three decades of a profoundly influential oeuvre that includes fiction, non-fiction, and works that lie somewhere in-between. Pushing further an intellectual trajectory increasingly visible since his three essays on the Tsunami of 2004, Ghosh uses The Nutmeg’s Curse to recollect, contemplate, warn, and counsel us about the planetary consequences of global modernity."
— Commonwealth Essays and Studies

"Ghosh’s writing is beautiful. . . . The Nutmeg’s Curse is to be applauded for evocatively describing the deep connections between colonialism and climate change."
— The India Forum

"[Ghosh's] 'non-fiction' reads as much more lucid and obstacle-free than academic offerings that usually fail in communicating a call to action that would cement a collective response to crisis. Ghosh concludes: 'It is essential now, as the prospect of planetary catastrophe comes ever closer, that those nonhuman voices be restored to our stories.' This is precisely how The Nutmeg’s Curse becomes urgent reading."
— LSE Review of Books Blog

"Ghosh connects colonialism’s brutal biopolitical wars against Indigenous peoples to our current climate catastrophe’s unprecedented omnicide. Countering the basic tenets of the European scientific revolution and its justification of extractive exploitation economies, he retrieves and retells the saving story of an enduring subterranean tide of vitalism."
— Christian Century