The Bonds of Inequality: Debt and the Making of the American City (Paperback) 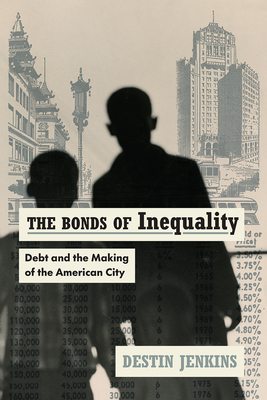 The Bonds of Inequality: Debt and the Making of the American City (Paperback)

Indebtedness, like inequality, has become a ubiquitous condition in the United States. Yet few have probed American cities’ dependence on municipal debt or how the terms of municipal finance structure racial privileges, entrench spatial neglect, elide democratic input, and distribute wealth and power.

In this passionate and deeply researched book, Destin Jenkins shows in vivid detail how, beyond the borrowing decisions of American cities and beneath their quotidian infrastructure, there lurks a world of politics and finance that is rarely seen, let alone understood. Focusing on San Francisco, The Bonds of Inequality offers a singular view of the postwar city, one where the dynamics that drove its creation encompassed not only local politicians but also banks, credit rating firms, insurance companies, and the national municipal bond market. Moving between the local and the national, The Bonds of Inequality uncovers how racial inequalities in San Francisco were intrinsically tied to municipal finance arrangements and how these arrangements were central in determining the distribution of resources in the city. By homing in on financing and its imperatives, Jenkins boldly rewrites the history of modern American cities, revealing the hidden strings that bind debt and power, race and inequity, democracy and capitalism.

Destin Jenkins is assistant professor of history at Stanford University.
“This is a provocative book. . . . Jenkins has done a remarkable job of historical excavation.”
— Bloomberg News

"The Bonds of Inequality goes a long way toward revealing the role of financial markets in the making of urban inequality. . . . Jenkins’s work gives us an opportunity to ask not only how public policy and private markets were related but also how the bond and real estate markets worked together. . . . Government, Jenkins contends in his innovative book, only made urban inequality with the help of capital markets."
— The Nation

“Jenkins offers a fine-grained look at [San Francisco]’s engagement with the muni bond market from the 1940s to the 1980s and at how the demands of that market affected the investments the city could make in its infrastructure and people.”
— David Marcus

"It joins a new canon of academic books analyzing what is broadly termed racial capitalism, Race for Profit by Keeanga-Yamahtta Taylor and Bankers and Empire by Peter James Hudson being two other notable examples. . . .While The Bonds of Inequality is not a history of radicalism, I found its methodology radical in itself. The deliberate way that Jenkins draws a web of the exact syndicates, companies, commissions, and lawyers that make up the municipal bond market reminded me of power mapping. There is something empowering in the way Jenkins picks apart the archives of Bank of America and other bondsmen."
— Rampant Magazine

"Field-altering. . . . Jenkins unveils the shadow city. . . The book proceeds from a seemingly simple question: How did municipal governments pay for their colossal and racially differentiated investments in infrastructure and social services during the postwar era? The answer, it turns out, requires taking a jackhammer to the political, economic, social, and material foundations of the city, a task that Jenkins performs with fiery conviction and bulls-eye precision."
— Reviews in American History

"A detailed history of debt politics in a single case city: San Francisco. . . . Jenkins joins the growing ranks of scholars fixing a racial-politics lens on the transition from Keynesianism to neoliberalism in the United States."
— Metropolitics

”Brilliant and pathbreaking. . . The genius of Bonds is its insistence on carefully demonstrating that ”federal failure is also the bankers’ story.”. . . The book clearly shows that the municipal bond sector’s hold on cities has grown only more toxic and suffocating as prolonged fiscal distress has become the default setting of American politics.”
— The Law & Political Economy Project

"Astonishing. . . By delving into the intricacies of municipal financing—bond markets, rating agencies, bankers, comptrollers, analysts, accountants—Jenkins has produced a fascinating study of a highly technical subject. What is more, he has also raised important questions about the power dynamics of U.S. cities, and about who possesses the ultimate power to reshape cities and control the form of urban societies."
— Places Journal

"Jenkins unearths an often stunning and truly unique history of the American city. He has delivered a critical addition to our understanding of urban inequality with which scholars of cities, urban planning, infrastructure, and development will need to contend for many years to come. . . . Histories of public housing, education, infrastructure, city planning, and urban political economy will no longer be complete without reckoning with Jenkins’s powerful work."
— Planning Perspectives

"The Bonds of Inequality: Debt, and the Making of the American City (University of Chicago Press, 2021)... is a detailed and damning account of how bond finance structures racial privilege in San Francisco and beyond."
— Public Books

“Many histories describe capitalism as a destructive phenomenon; the rare few take us into the guts of the system. Jenkins exposes the arteries and muscle, the bloodstreams that deliver money and credit to create racial capitalism. In a brilliant and tragic account, he reveals how bond finance—and the people who make it happen—extracts wealth and reconfigures governance, breaking urban communities on the very promise meant to rescue them: liberal investment in the public welfare.”
— Christine Desan, author of Making Money: Coin, Currency, and the Coming of Capitalism

“Tracing the relationships between bondholders, banks, and municipal debt from the New Deal to the 1980s, The Bonds of Inequality provides an essential new layer to the history of racial capitalism. In a moment when unprecedented numbers of Americans are in debt and cities across the country continue to file for bankruptcy, this brilliant book could not be more timely.”
— Elizabeth Hinton, author of From the War on Poverty to the War on Crime: The Making of Mass Incarceration in America

“Through a forensic inquest into the archives of the twentieth-century bond market, Jenkins unravels the intricate and entangled social, cultural, and political-economic worlds of urban money and credit, demonstrating in astonishing detail how financiers and technocrats came to triumph over citizens, how cities bent to the rule of lenders, and how the life of debt took precedence over the good of democratic society. Written with eloquence, clarity, and quiet, smoldering fury, The Bonds of Inequality is a critical and timely intervention into the political economy of cities and the history of capitalism. Its lessons are as important for the Bay Area as for the rest of the indebted world.”
— Peter James Hudson, author of Bankers and Empire: How Wall Street Colonized the Caribbean

“In this pathbreaking book, Jenkins makes two crucial interventions. He gives municipal finance a much-needed history, and—even more important—he opens up a new framework for understanding persistent racial inequality in American cities. Through rigorous research and sophisticated analysis, The Bonds of Inequality literally follows the money, tracing the connections between race, urban economic development, and capitalism.”
— Thomas J. Sugrue, author of Not Even Past: Barack Obama and the Burden of Race

“With The Bonds of Inequality, Jenkins delivers a sophisticated and important book. In uncovering previously hidden relationships between democracy and power, he powerfully explains the impact of debt service on municipal budgets, and follows this impact over time. His original view of urban governance combines a historian’s perspective with a refreshed moral compass. The impact of this original book, as a unique contribution to scholarship, is enormous.”
— Alison Isenberg, author of Designing San Francisco: Art, Land and Urban Renewal in the City by the Bay

“The Bonds of Inequality is a brilliantly conceived and executed book about the politics, culture, and economics of municipal finance, centered on the postwar history of San Francisco. Jenkins breaks new ground by re-situating the history of post-World War II urban development in the financing networks that literally made possible the construction of urban infrastructure. Drawing on a wonderful range of little-used or newly discovered sources, his book is a remarkable accomplishment.”
— Kimberly Phillips-Fein, author of Fear City: New York’s Fiscal Crisis and the Rise of Austerity Politics

"Jenkins details the mostly hidden or forgotten history of the municipal bond market and its role in perpetuating systemic racial inequality."
— Next City