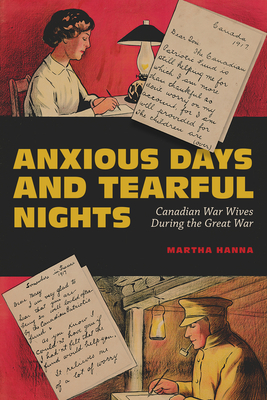 
This title is likely unavailable. Email or call for price and availability.
What was it like to be a soldier's wife in Canada during the First World War? More than 80,000 Canadian women were married to men who left home to fight in the war, and its effects on their lives were transformative and often traumatic. Yet the everyday struggles of Canadian war wives, lived far from the battlefields of France, have remained in the shadows of historical memory. Anxious Days and Tearful Nights highlights how Canadian women's experiences of wartime marital separation resembled and differed from those of their European counterparts. Drawing on the letters of married couples separated by wartime service and the military service records of hundreds of Canadian soldiers, Martha Hanna reveals how couples used correspondence to maintain the routine and the affection of domestic life. She explores how women managed households and budgets, how those with children coped with the challenges of what we today would call single parenthood, and when and why some war wives chose to relocate to Britain to be nearer to their husbands. More than anything else, the life of a war wife - especially a war wife separated from her husband for years on end - was marked and marred by unrelieved psychological stress. Through this close personal lens Hanna reveals a broader picture of how war's effects persist across time and space.
Martha Hanna is professor in the Department of History at the University of Colorado Boulder.
"In September 1917, Secretary of State Arthur Meighen spoke of Canadian women spending their 'days in anxiety and their nights in tears'. Taking this as her inspiration, Hanna spotlights the disparate experiences of the war wife, an under-analysed historical subject. There is always a danger in attempting to position a particular group within a hierarchy of emotional suffering. ... By illuminating the specific circumstances and hardships endured by Canadian wives, Hanna's fresh perspective adds greatly to our understanding of the effect of the Great War on the civilian populations of the combatant nations." Medicine, Conflict, and Survival

"Rich in analysis and uncommonly sharp insights, Anxious Days and Tearful Nights recounts evocative stories of women experiencing the war at home. It is a compelling read, tragic and awful in places, but also revealing of the stoic courage of many women w