Elite Statecraft and Election Administration: Bending the Rules of the Game? (Hardcover) 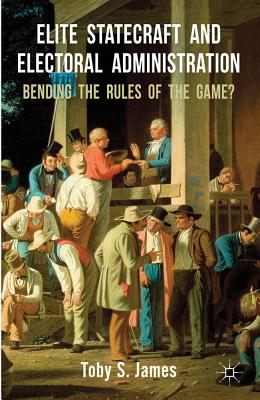 Elite Statecraft and Election Administration: Bending the Rules of the Game? (Hardcover)


Available in Warehouse. Wait for Email Confirmation for ETA
The way in which elections are run is changing, as radical reforms or experiments have been introduced across the world. This book establishes why election administration might be used by political elites to win and maintain power. It identifies the role of elite interests in shaping election administration in USA, UK and Ireland.
TOBY S. JAMES is Lecturer in the School of Political, Social and International Studies at the University of East Anglia. He has published on electoral institutions and governance, political leaders and the policy process. He was previously a British Research Council Scholar in the Kluge Center at the Library of Congress, Washington D.C.

"Toby James has written an important book. Election administration has been a neglected subject but, as James demonstrates, by ignoring the intricacies of how elections are managed and run we are ignoring an important aspect of politics and power. As this well written and informative book demonstrates, the rules of elections affect the outcome and the book does an excellent job in drawing out attention to running of elections. It also highlights how, when thinking about constitutional reform we need to think about how citizens vote." - Martin J. Smith, Professor, University of Sheffield, UK

"Elite Statecraft and Election Administration presents an innovative integration of election administration and politics to present a framework for evaluating administrative arrangements and for explaining when these arrangements will change. This book is important for understanding cross-national variations in the ways in which elections are run." - Thad Hall, Professor, University of Utah, USA