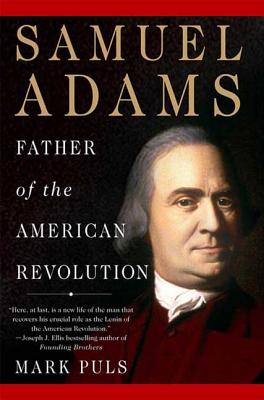 Samuel Adams is perhaps the most unheralded and overshadowed of the founding fathers, yet without him there would have been no American Revolution. A genius at devising civil protests and political maneuvers that became a trademark of American politics, Adams astutely forced Britain into coercive military measures that ultimately led to the irreversible split in the empire. His remarkable political career addresses all the major issues concerning America's decision to become a nation -- from the notion of taxation without representation to the Declaration of Independence. George Washington, Thomas Jefferson and John Adams all acknowledged that they built our nation on Samuel Adams' foundations. Now, in this riveting biography, his story is finally told and his crucial place in American history is fully recognized.

Mark Puls is the author of Samuel Adams: Father of the American Revolution, winner of the Fraunces Tavern Museum Book Award, and co-author of Uncommon Valor: A Story of Race, Patriotism and Glory in the Final Battles of the Civil War with Pulitzer Prize winning journalist Melvin Claxton. Puls has worked as a journalist for The Detroit News. He lives in Hawntranck, MI.

“In the midst of the current surge of interest in the founders, the most conspicuous absence is Samuel Adams, an absence that most of his peers would have found inexplicable. Here, at last, is a new life of the man that recovers his crucial role as the Lenin of the American Revolution.” —Joseph J. Ellis, bestselling author of Founding Brothers

“Mark Puls has restored Sam Adams to his rightful place in the spotlight on the revolutionary stage. Puls' Adams is less the hotheaded rabble rouser of popular mythology than a kind of intellectual field marshall--yet one who had the audacity to put ideas to work when the time came to dump tea in Boston harbor. What a character, and what a drama!” —James Tobin, award-winning author of To Conquer the Air

“Required reading for anyone with even the slightest interest in how the United States of America came into existence.” —Melvin Claxton, winner of the Pulitzer Prize for Journalism

“A brief, sharply focused biography of the mastermind behind the American colonies' break with England, and the drive for independence. . . . Fully restores Adams to his rightful place as an indispensable provocateur of American liberty.” —Kirkus

“Puls has written a highly readable biography of this fascinating man. Focusing on Adams' writing and tactics, [Puls] documents in meticulous detail how a man--armed with little else except his words--triggered a revolution and helped construct the foundations for a new nation. In crisp prose, Puls builds a convincing case that Adams left his indelible mark on all the major issues of the day. . . . Puls has restored Adams to his rightful place in our history. His new books breathes new life into Adams' legacy, showing the values he instilled continue to define our country even today.” —The Tucson Citizen

“Puls' book goes a long way toward creating the day when, one hopes, Sam Adams will set the standard for good politicians every bit as much as he does for good beer.” —New York Post

“Any Founding Father who ends his days in such a fighting spirit deserves still more of our attention. Samuel Adams is a good place to start.” —The Wall Street Journal

“This is an excellent book for those wanting to explore America's heritage and political history.” —Lt. Cmdr. Youssef Aboul-Enein, MSC, USN Naval District Washington, The Waterline