After the American Century: The Ends of U.S. Culture in the Middle East (Paperback) 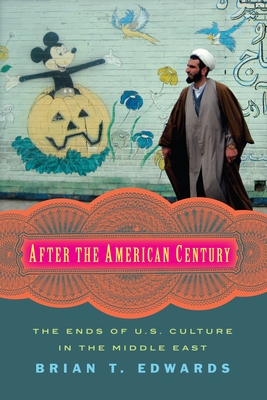 After the American Century: The Ends of U.S. Culture in the Middle East (Paperback)

When Henry Luce announced in 1941 that we were living in the "American century," he believed that the international popularity of American culture made the world favorable to U.S. interests. Now, in the digital twenty-first century, the American century has been superseded, as American movies, music, and video games are received, understood, and transformed.

How do we make sense of this shift? Building on a decade of fieldwork in Cairo, Casablanca, and Tehran, Brian T. Edwards maps new routes of cultural exchange that are innovative, accelerated, and full of diversions. Shaped by the digital revolution, these paths are entwined with the growing fragility of American "soft" power. They indicate an era after the American century, in which popular American products and phenomena--such as comic books, teen romances, social-networking sites, and ways of expressing sexuality--are stripped of their associations with the United States and recast in very different forms.

Arguing against those who talk about a world in which American culture is merely replicated or appropriated, Edwards focuses on creative moments of uptake, in which Arabs and Iranians make something unexpected. He argues that these products do more than extend the reach of the original. They reflect a world in which culture endlessly circulates and gathers new meanings.

Brian T. Edwards is Crown Professor in Middle East Studies and professor of English and comparative literary studies at Northwestern University, where he is also the founding director of the Middle East and North African Studies Program. He is the author of Morocco Bound: Disorienting America's Maghreb, from Casablanca to the Marrakech Express (2005) and a coeditor of Globalizing American Studies (2010). His articles have been published in the Believer, Public Culture, the Chicago Tribune, and elsewhere.