Wisdom as a Way of Life: Theravāda Buddhism Reimagined (Paperback) 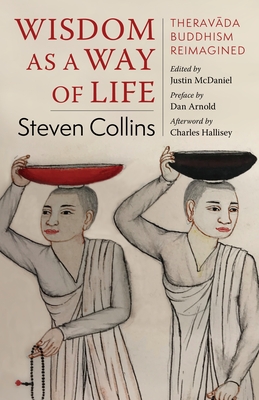 Wisdom as a Way of Life: Theravāda Buddhism Reimagined (Paperback)

This wide-ranging and powerful book argues that Theravāda Buddhism provides ways of thinking about the self that can reinvigorate the humanities and offer broader insights into how to learn and how to act. Steven Collins argues that Buddhist philosophy should be approached in the spirit of its historical teachers and visionaries, who saw themselves not as preservers of an archaic body of rules but as part of a timeless effort to understand what it means to lead a worthy life. He contends that Buddhism should be studied philosophically, literarily, and ethically using its own vocabulary and rhetorical tools. Approached in this manner, Buddhist notions of the self help us rethink contemporary ideas of self-care and the promotion of human flourishing.

Collins details the insights of Buddhist texts and practices that promote the ideal of active and engaged learning, offering an expansive and lyrical reflection on Theravāda approaches to meditation, asceticism, and physical training. He explores views of monastic life and contemplative practices as complementing and reinforcing textual learning, and argues that the Buddhist tenet that the study of philosophy and ethics involves both rigorous reading and an ascetic lifestyle has striking resonance with modern and postmodern ideas. A bold reappraisal of the history of Buddhist literature and practice, Wisdom as a Way of Life offers students and scholars across the disciplines a nuanced understanding of the significance of Buddhist ways of knowing for the world today.

Steven Collins (1951-2018) was Chester D. Tripp Professor in the Humanities at the University of Chicago, where he was affiliated with the Department of South Asian Languages and Civilizations and with the Divinity School. Among his many works are Nirvana and Other Buddhist Felicities: Utopias of the Pali Imaginaire (1998) and, as editor, Readings of the Vessantara Jātaka (Columbia, 2016). Justin McDaniel is professor of religious studies at the University of Pennsylvania. His books include The Lovelorn Ghost and the Magical Monk: Practicing Buddhism in Modern Thailand (Columbia, 2011). Dan Arnold is associate professor of philosophy of religions at the University of Chicago Divinity School. His books include Brains, Buddhas, and Believing: The Problem of Intentionality in Classical Buddhist and Cognitive-Scientific Philosophy of Mind (Columbia, 2012). Charles Hallisey is Yehan Numata Senior Lecturer on Buddhist Literatures at Harvard Divinity School. His books include Therigatha: Poems of the First Buddhist Women (2015).