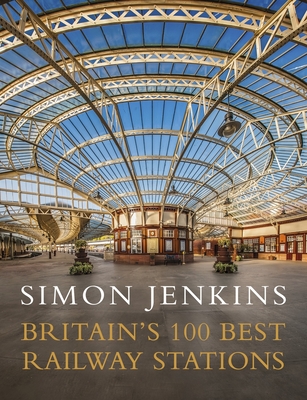 It is the location of all our hopeful beginnings and intended ends; an institution with its own rituals and priests; and a long-neglected aspect of Britain's architecture: the railway station. Historian Simon Jenkins has traveled the length and breadth of Britain to select this joyous celebration of social history. With his usual insight and authority, he describes the history, geography, design, and significance of each of these glories; explores their role in the national imagination; champions the engineers, architects, and rival companies that made them possible; and tells the story behind the development, triumphs, and follies of these very British creations. From Waterloo to Whitby, St Pancras to Stirling, these are the marvelous, often undersung places that link the nation. All aboard!

Simon Jenkins is the author of A Short History of England, England's Thousand Best Churches, and England's Thousand Best Houses. He is the former editor of the Evening Standard and Times, and a columnist for the Guardian and Evening Standard. He has served as deputy chairman of English Heritage and chairman of the National Trust, was a founder member of SAVE Britain's Heritage and chaired the revision of the Pevsner guides from 1994 to 2011. He founded the Railway Heritage Trust and has served on the Boards of British Rail and London Transport.

"This glorious and utterly essential guide to Britain's best railway stations is also a history of some of the remarkable - but often undersung - landmarks to our social history . . . this is the September title I most want to get my hands on." —Bookseller

"Inspired . . . encourages us to take a fresh look at the familiar." —Times on England's Cathedrals'

"Masterly, perhaps a masterpiece." —Independent Books of the Year on England's 1000 Best Houses