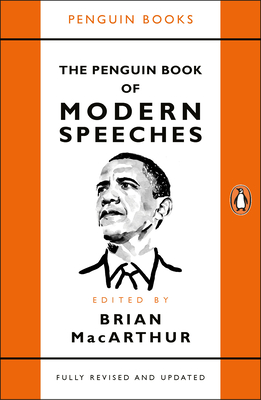 
This title is likely unavailable. Email or call for price and availability.
This definitive collection gathers the most significant speeches of the modern era, from Theodore Roosevelt and Martin Luther King Jr. to Ronald Reagan and Michelle Obama

Defined by waves of idealism and doubt, progress and destruction, the twentieth century and the first decades of the twenty-first have seen the best and worst of humanity in measures previously unimaginable. Underpinning the rise of radio, television, and the internet, the spoken word has proven ever more crucial in stirring the hearts and minds of millions around the world.

In these pages, Emmeline Pankhurst agitates for the right to vote; Adolf Hitler rises to power; Fidel Castro sparks a revolution; John F. Kennedy calls Americans to action; Betty Friedan rallies for equality; and Barack Obama contemplates the meaning of America. The speeches contained in The Penguin Book of Modern Speeches, some of the most extraordinary and memorable of the modern age, have established and shaped how we understand ourselves and our place in the world around us.
Brian MacArthur (1940-2019) was founding editor of Today and The Times Higher Education Supplement, editor of the Western Morning News, deputy editor of the Sunday Times, and executive editor of The Times. MacArthur was the author of Surviving the Sword: Prisoners of the Japanese 1942-1945 and editor of The Penguin Book of Historic Speeches. He lived in Norfolk and London.
“It would be hard to do better than MacArthur’s selection, which is a tribute to the breadth of his knowledge.” —The Times (London)