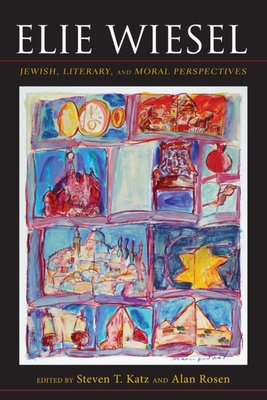 Nobel Peace Prize recipient Elie Wiesel, best known for his writings on the Holocaust, is also the accomplished author of novels, essays, tales, and plays as well as portraits of seminal figures in Jewish life and experience. In this volume, leading scholars in the fields of Biblical, Rabbinic, Hasidic, Holocaust, and literary studies offer fascinating and innovative analyses of Wiesel's texts as well as illuminating commentaries on his considerable influence as a teacher and as a moral voice for human rights. By exploring the varied aspects of Wiesel's multifaceted career--his texts on the Bible, the Talmud, and Hasidism as well as his literary works, his teaching, and his testimony--this thought-provoking volume adds depth to our understanding of the impact of this important man of letters and towering international figure.

Steven T. Katz is Director of the Elie Wiesel Center for Judaic Studies and holds the Shirley Slater Chair in Jewish and Holocaust Studies at Boston University. He is editor of The Shtetl: New Evaluations and The Impact of the Holocaust on Jewish Theology.Alan Rosen teaches Holocaust literature at the International School for Holocaust Studies, Yad Vashem, and other Holocaust study centers. He is author of Sounds of Defiance: The Holocaust, Multilingualism, and the Problem of English and The Wonder of Their Voices: The 1946 Holocaust Interviews with David Boder.