The United States Holocaust Memorial Museum Encyclopedia of Camps and Ghettos, 1933-1945, Volume IV: Camps and Other Detention Facilities Under the Ge (Hardcover) 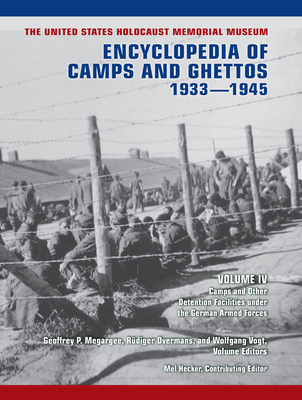 The United States Holocaust Memorial Museum Encyclopedia of Camps and Ghettos, 1933-1945, Volume IV: Camps and Other Detention Facilities Under the Ge (Hardcover)


Available in Warehouse. Wait for Email Confirmation for ETA
The United States Holocaust Memorial Museum Encyclopedia of Camps and Ghettos, 1933-1945, Volume IV aims to provide as much basic information as possible about individual camps and other detention facilities. Why were they established? Who ran them? What kinds of prisoners did they hold? What kinds of work did the prisoners do, and for whom? What were the conditions like? The entries detail the sources from which the authors drew their material, so future scholars can expand upon the work. Finally, and perhaps most important, this is a work of memorialization: it preserves the histories of places where people suffered and died.
Volume IV examines an under-researched segment of the larger Nazi incarceration system: camps and other detention facilities under the direct control of the German military, the Wehrmacht. These include prisoner of war (POW) camps (including camps for enlisted men, camps for officers, camps for naval personnel and airmen, and transit camps), civilian internment and labor camps, work camps for Tunisian Jews, brothels in which women were forced to have sex with soldiers, and prisons and penal camps for Wehrmacht personnel. Most of these sites have not been described in detail in the existing historical literature, and a substantial number of them have never been documented at all. The volume also includes an introduction to the German prisoner of war camp system and its evolution, introductions to each of the various types of camps operated by the Wehrmacht, and entries devoted to each individual camp, representing the most comprehensive documentation to date of the Wehrmacht camp system.
Within the entries, the volume draws upon German military documents, eyewitness and survivor testimony, and postwar investigations to describe the experiences of prisoners of war and civilian prisoners held captive by the Wehrmacht. Of particular note is the detailed documentation of the Wehrmacht's crimes against Soviet prisoners of war, which have largely been neglected in the English-language literature up to this point, despite the fact that more than three million Soviet prisoners died in German captivity. The volume also provides substantial coverage of the diverse range of conditions encountered by other Allied prisoners of war, illustrating both the substantial privations faced by all prisoners of war and the stark contrast between the Germans' treatment of Soviet prisoners and those of other nationalities. The volume also details the significant involvement of the Wehrmacht in crimes against the civilian populations of occupied Europe and North Africa. As a result, this volume not only brings to light many detention sites whose existence has been little known, but also advances the decades-old process of dismantling the myth of the "clean Wehrmacht," according to which the German military had nothing to do with the Holocaust and the Nazi regime's other crimes.