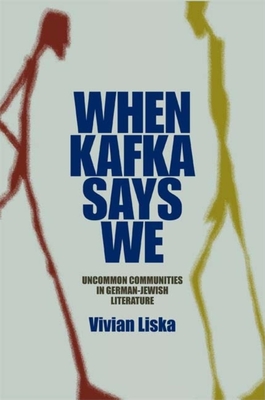 Taking as its starting point Franz Kafka's complex relationship to Jews and to communities in general, When Kafka Says We explores the ambivalent responses of major German-Jewish writers to self-enclosed social, religious, ethnic, and ideological groups. Vivian Liska shows that, for Kafka and others, this ambivalence inspired innovative modes of writing which, while unmasking the oppressive cohesion of communal groupings, also configured original and uncommon communities. Interlinked close readings of works by German-Jewish writers such as Kafka, Else Lasker-Sch ler, Nelly Sachs, Paul Celan, Ilse Aichinger, and Robert Schindel illuminate the ways in which literature can subvert, extend, or reconfigure established visions of communities. Liska's rich and astute analysis uncovers provocative attitudes and insights on a subject of continuing controversy.

Vivian Liska is Professor of German Literature and Director of the Institute of Jewish Studies at the University of Antwerp, Belgium. She is author of The Night of the Hymns: Paul Celan's Poems, 1938-1944 (in German) and editor (with Thomas Nolden) of Contemporary Jewish Writing in Europe: A Guide (IUP, 2008).