Beyond the Self: Conversations between Buddhism and Neuroscience (Hardcover) 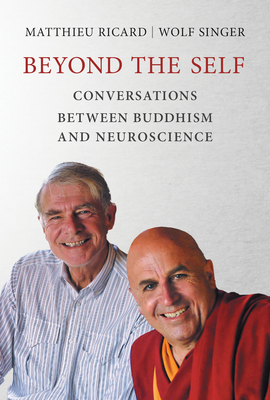 Beyond the Self: Conversations between Buddhism and Neuroscience (Hardcover)


This title is likely unavailable. Email or call for price and availability.
Converging and diverging views on the mind, the self, consciousness, the unconscious, free will, perception, meditation, and other topics.

Buddhism shares with science the task of examining the mind empirically; it has pursued, for two millennia, direct investigation of the mind through penetrating introspection. Neuroscience, on the other hand, relies on third-person knowledge in the form of scientific observation. In this book, Matthieu Ricard, a Buddhist monk trained as a molecular biologist, and Wolf Singer, a distinguished neuroscientist—close friends, continuing an ongoing dialogue—offer their perspectives on the mind, the self, consciousness, the unconscious, free will, epistemology, meditation, and neuroplasticity.

Ricard and Singer's wide-ranging conversation stages an enlightening and engaging encounter between Buddhism's wealth of experiential findings and neuroscience's abundance of experimental results. They discuss, among many other things, the difference between rumination and meditation (rumination is the scourge of meditation, but psychotherapy depends on it); the distinction between pure awareness and its contents; the Buddhist idea (or lack of one) of the unconscious and neuroscience's precise criteria for conscious and unconscious processes; and the commonalities between cognitive behavioral therapy and meditation. Their views diverge (Ricard asserts that the third-person approach will never encounter consciousness as a primary experience) and converge (Singer points out that the neuroscientific understanding of perception as reconstruction is very like the Buddhist all-discriminating wisdom) but both keep their vision trained on understanding fundamental aspects of human life.

Matthieu Ricard, a Buddhist monk, trained as a molecular biologist before moving to Nepal to study Buddhism. He is the author of The Monk and the Philosopher (with his father, Jean-François Revel);The Quantum and the Lotus (with Trinh Thuan); Happiness; The Art of Meditation; Altruism: The Power of Compassion; A Plea for the Animals; and Beyond the Self: Conversations between Buddhism and Neuroscience (with Wolf Singer). He has published several books of photography, including Motionless Journey and Tibet: An Inner Journey, and is the French interpreter for the Dalai Lama.