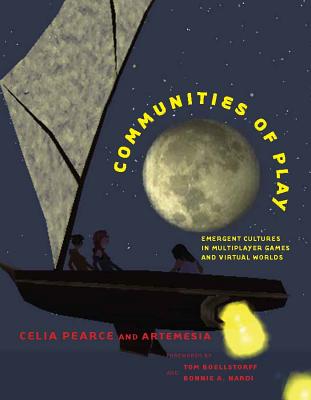 The odyssey of a group of "refugees" from a closed-down online game and an exploration of emergent fan cultures in virtual worlds.

Play communities existed long before massively multiplayer online games; they have ranged from bridge clubs to sports leagues, from tabletop role-playing games to Civil War reenactments. With the emergence of digital networks, however, new varieties of adult play communities have appeared, most notably within online games and virtual worlds. Players in these networked worlds sometimes develop a sense of community that transcends the game itself.

In Communities of Play, game researcher and designer Celia Pearce explores emergent fan cultures in networked digital worlds--actions by players that do not coincide with the intentions of the game's designers. Pearce looks in particular at the Uru Diaspora--a group of players whose game, Uru: Ages Beyond Myst, closed. These players (primarily baby boomers) immigrated into other worlds, self-identifying as "refugees"; relocated in There.com, they created a hybrid culture integrating aspects of their old world. Ostracized at first, they became community leaders. Pearce analyzes the properties of virtual worlds and looks at the ways design affects emergent behavior. She discusses the methodologies for studying online games, including a personal account of the sometimes messy process of ethnography. Pearce considers the "play turn" in culture and the advent of a participatory global playground enabled by networked digital games every bit as communal as the global village Marshall McLuhan saw united by television. Countering the ludological definition of play as unproductive and pointing to the long history of pre-digital play practices, Pearce argues that play can be a prelude to creativity.

Steinar Andresen is a Senior Research Fellow at the Fridtjof Nansen Institute in Norway.