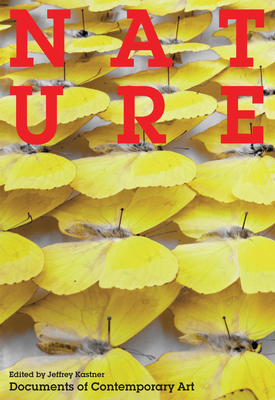 
This title is likely unavailable. Email or call for price and availability.
Contemporary artists' radical investigations of nature, juxtaposed with the eclectic scientific and philosophical sources that inform their art.

Nature, as both subject and object, has been repeatedly rejected and reclaimed by artists over the last half century. With the dislocation of disciplinary boundaries in visual culture, art that is engaged with nature has also forged connections with a new range of scientific, historical, and philosophical ideas. Developing technologies make our interventions into natural systems both increasingly refined and profound. Advances in biological and telecommunication technology continually modify the way we present ourselves. So too are artistic representations of nature (human and otherwise) being transformed.

This anthology addresses these issues by considering how the rise of transdisciplinary practices in the postwar era allowed for new kinds of artistic engagement with nature. These include the postminimalist inscriptions associated with Land art; environmentally engaged practices designed to propose novel forms of stewardship; and more recent projects concerned with relationships between the most subtle and minute components of life and the large-scale appearance of the world. These projects unsettle the most basic operations of “natural” personhood and identity.

Including a wide range of writings by and about artists, juxtaposed with influential texts from diverse theoretical bases, this collection provides an overview of the eclectic scientific and philosophical sources that inform contemporary art's investigations of nature.

Jeffrey Kastner is a New York–based writer and critic and senior editor of Cabinet. A regular contributor to Artforum and the New York Times, he has written extensively on contemporary art in numerous catalogues and journals. His books include Land and Environmental Art.
While exploring how artists and theorists mediate between the spheres of nature and culture, [Nature] also raises productive questions about how 'otherness' is defined between and within natural categories.—Wendy Vogel, The Brooklyn Rail—